Amy Sherald is a Baltimore based artist acclaimed for her striking portraits of contemporary African Americans. She is known for painting skin tones in gray scale as a way of countering the association of color with race. Writing in the New York Times, Holland Carter explained that Sherald “gives all her figures gray-toned skin—a color with ambiguous racial associations—and reduces bodies to geometric forms silhouetted against single-color fields.” 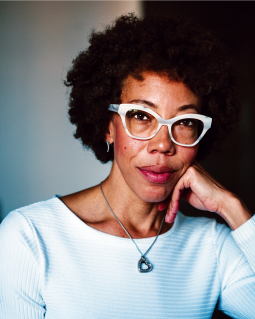 Portrait of a First Lady
The national spotlight turned to Sherald when Michelle Obama selected her to paint her official portrait for the Smithsonian National Portrait Gallery. The painting was unveiled in February 2018, along with Barack Obama’s portrait painted by Kehinde Wiley, also an African American artist. Sherald is the first African American artist to paint an official first lady portrait. Of the Michelle Obama portrait, art critic Jerry Saltz wrote in Vulture that it depicted her as an “everyday queen of heaven: She is grand, elegant, gorgeous, but her jackrabbit-quick wit is right there. Set against a monochrome flat powder blue, the First Lady is a guiding star to another kind of glamour, a serious spirit whose sorrows were released, who spread warmth, respect, a sly sense of humor, and protectiveness. And a different idea of female power and beauty.”

The National Portrait Gallery announced a free giveaway of teaching posters for both the Michelle and Barack Obama portraits. Because of the more than 30,000 requests that have been received, submissions were suspended as of this writing. Check npg.si.edu/obama-poster-request-form in the Spring of 2019 about renewed availability. 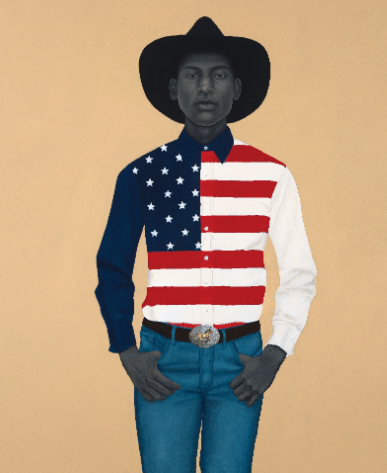 Interview
The 2019 NAEA National Convention, held in Boston this March, is honored to be hosting Sherald as a keynote speaker. Sherald graciously shared her thoughts with SchoolArts in anticipation of her appearance at NAEA:

SA: What are some of the biggest influences on your work, including other artists, events, or things outside of the arts?
AS: My upbringing and my environment has had a great influence on my work. Movies like Big Fish, and pretty much every Wes Anderson movie made. The life and musical journey of John Coltrane. Photographers such as Gordon Parks, Vivían Maier, and Wayne Lawrence. Painters such as Rembrandt and Velázquez, and American painters such as Bo Bartlett.

SA: How do your portraits express what you perceive in your subjects?
AS: They express through their pose but also by what they are wearing. I think the greatest way is through their eyes. It’s them but essentially it’s the presence I see beyond their outward appearance. What qualifies them and is the impetus for me to approach them, no one else may see. It’s like spotting someone you do not know in a crowd, but for some reason you catch each other’s eye.

SA: You are known for using a gray scale to paint skin tones and only portraits of African Americans. Can you share your reasons for those choices?
AS: The gray scale was an aesthetic choice. Of course, art provokes dialogue; transitioning brown skin to gray can hold many different meanings. I only paint African Americans because images of whiteness have been projected into in perpetuity through painting and other mediums including media. My work stands in history as a correction to a dominant historical art narrative.

SA: What advice do you have for emerging artists?
AS: Don’t compare yourself to anyone else and know that your journey is your journey and things will happen when they are supposed to.

SA: What are you currently working on in your studio?
AS: I am working towards my solo show in New York City with Hauser and Wirth in September 2019.

SA: You are one of the keynote speakers at the 2019 NAEA National Convention in Boston. What message would you like to leave with art teachers to share with their students?
AS: Focus on the realities of their experience in the lesson so that they don’t just feel like passive learners. I went through most of my educational career feeling like my teachers didn’t get me. Engage them in a way that they can become citizens of the classroom and be empowered to speak up.

Nancy Walkup is the editor-in-chief of SchoolArts magazine, a contributing author of Explorations in Art, and editor of SchoolArts Collection: Media Arts, available now from Davis Publications 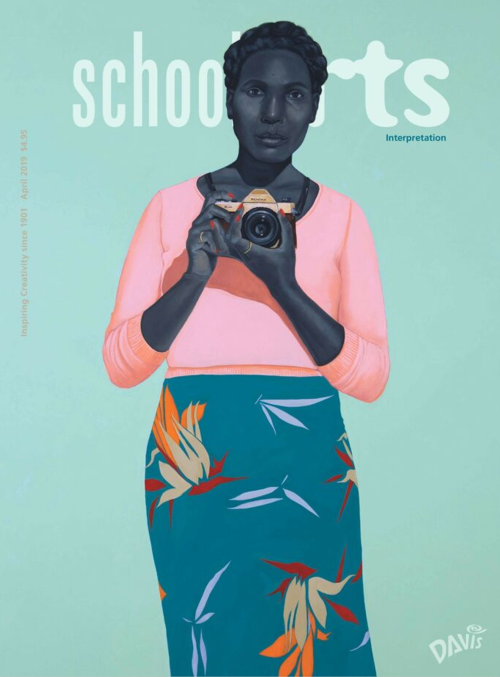 Art teachers highlight the value of art interpretation and art criticism in their curriculum. High-school students use birdhouses as any entry point for narrating their personal journeys; elementary students incorporate famous artists into their selfies; middle-school students use water-soluble oils for the first time; and more.