In 2020, I received a Missouri Arts Council grant to bring St. Louis artist Cbabi Bayoc to our small-town community. Cbabi’s first and last names are acronyms: Creative Black Artist Battling Ignorance and Blessed African Youth of Creativity. The grant resulted in a mural that was painted at the start of the school year, fueling excitement for our Globally Strong Culture Fair. The goals of our mural were to help students see themselves in the work and to spark curiosity about the wider world outside of our rural Ozark Community.

The need to reach our students and wider community by celebrating diversity and practicing equity and inclusion continues, even as these words take on political charge. In 2020, I received a Missouri Arts Council grant to bring St. Louis artist Cbabi Bayoc to our small-town community. Cbabi’s first and last names are acronyms: Creative Black Artist Battling Ignorance and Blessed African Youth of Creativity.

The grant resulted in a mural that was painted at the start of the school year, fueling excitement for our Globally Strong Culture Fair. The goals of our mural were to help students see themselves in the work and to spark curiosity about the wider world outside of our rural Ozark Community.

Getting Started
An 8 x 43' (2 x 13 m) wall adjacent to a hallway was selected for the painting. Cbabi started with a sketch of six characters and encouraged input from students as he painted with them. For instance, a girl playing the violin transformed into a saxophonist to better reflect our band program.

During the first three days of painting, student volunteers helped with blocking in colors. Cbabi used high-grade spray paint while ventilating with a fan. Photojournalism teacher Eric Adams conducted interviews, and a local television station used his footage to run a story.

Working with an Artist
Students were excited to collaborate with a professional artist with rock-star status. A series of teaching sessions and volunteer painting filled the week. Monday’s activities involved students with last names beginning with A to J. On Tuesday, we continued the process with students with last names K to Z, and rotated between the two groups for the rest of the week. Students learned about Cbabi’s methods and the nature of composition; the use of line, shape, and color; iconography; and how forms can be abstracted. Students from arts, language, social studies, and special education classrooms watched, painted, and wrote about the mural in person and through a livestream.

Process Q&A
Cbabi was asked why he chose to leave the wall’s previous decor, which included wooden letters spelling “Lebanon.” He turned the letters into a powerful metaphor about gentrification: “Just because we are changing the wall doesn’t mean they need to leave. They can stay and become part of the beauty.”

As Cbabi continued to paint and instruct students, he emphasized “the journey, not the outcome.” He answered questions about his tattoos referencing fatherhood, art, and truth. He discussed his education at Grambling State University and his twenty-five-year career starting as a caricature artist at Six Flags, later boosted by the sale of multiple paintings to Prince.

Iconography
Near the center of the mural, a stylized red hand holds up a cog with the message, “Everybody plays a part.” After the passing of Supreme Court Justice Ruth Bader Ginsburg, Cbabi added a large number “9” behind the cog and surrounded the image with the rainbow stripes of a pride flag. This references Ginsburg’s answer to the question, “How many SCOTUS justices should be women?” and her work to promote equality for all. A monk performing a yogic contortion stands to the left, wearing a facemask that says, “Woke.” To the right, a red-haired girl with green lipstick plays the saxophone. On her skirt, it says, “Be heard.”

When Cbabi drew a meditating figure on the right edge, someone suggested adding camouflage to represent our school’s culture. As a student painted the pattern, Cbabi said that made sense because that’s where hunters find their peace. The Spanish word for peace, paz, floats in the background. Another figure is an inspirational Filipino track star. She couldn’t afford shoes, so she made her own painted with Nike swooshes and went on to win Olympic gold. Students asked for a departed classmate’s jersey number to be remembered on the shirt with our mascot on the shorts. The memorial turned the wall into sacred ground.

Student Responses
One student continued to paint while recruiting and managing other student artists. Another student recognized his own likeness in the suspender-wearing figure Cbabi called “Classic Man,” standing next to a classic red truck. Cbabi added references to agriculture through a windmill, an abstracted pig, farmland, and a portion of the FFA logo. A Black ballerina completes the left side of the mural, her gaze seeming to fix on the viewer.

Cbabi’s project was a transformative experience for students and staff. One student wrote, “The moods and meanings behind the artwork...[are] basically, don’t feel left out or like you need to change to be like others if you are different. It is okay to be different.” May his generation send this message across the nation and work to dismantle systemic injustice.

An Homage to the Guitar 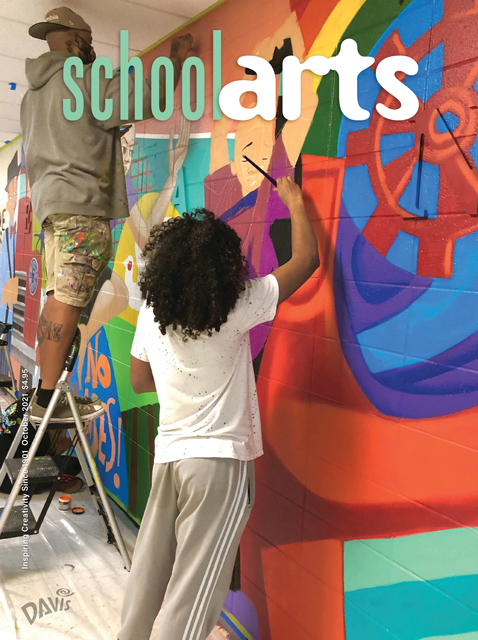 Art is integrated with subject areas such as math, science, writing, social studies, and music to create rich and holistic learning experiences. Young students explore cubism and develop collagraph prints inspired by a guitar study, elementary students use a Visual Thinking Strategy to evaluate art and literature, middle-school students sculpt clay bones and participate in an outdoor archaeological dig, high-school students collaborate with a professional artist to paint a mural that celebrates diversity, equity, and inclusion, and more.