Middle School
By Melody Weintraub, posted on May 1, 2019

As art teachers, sometimes it doesn't take much to inspire us. In my case, it took our school’s tech team leaving behind my classroom’s dismantled wireless router in a trash bin. After digging it out, I marveled at the interesting and colorful components, and I knew my students would love to get their creative hands and imaginative minds on these wires and switches.

The plan that evolved was for students to design nonmechanical Steampunk-inspired robots by assembling these parts in a new way. I didn’t have enough parts for all of the students in my seventh-grade class, so I contacted our tech support department with a request for any broken computers that might be taking up space in storage. When I was ushered to a storage room where the broken computers wait to be shipped off for recycling, I felt a bit like a kid in a candy store. I selected enough monitors, laptops, and modules for students to have a field day taking them apart and discovering what goes on inside something they use every day.

Safety First
Before allowing students to take apart the computers, I asked the tech specialists if there were any precautions we should take, especially with the capacitors. I was assured that these computers had been inactive long enough so that there was no danger.

I did some further research and found that precautions should also be considered in cutting into the mother-board because it is made of fiberglass. I decided if any cuts were to be made in those components, I would ask students to mark where they wanted cuts and I would do the cutting.

Dismantling
The dismantling took about a week of class time, but it was well spent. During this process, students learned the importance of having the right tool for the right purpose and the importance of taking care of those tools. As students learned the difference between a Phillips head and flat head, wire snips and pliers, they also saw the delicacies of how the inside of the machines were designed. “Mrs. Weintraub, this motherboard looks like a city!” one student told me. 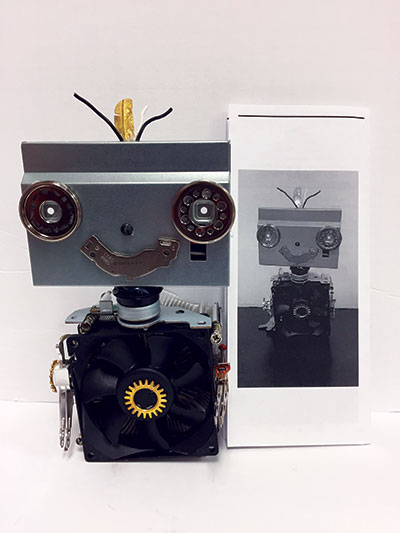 An Engineering Design Module
We began by reviewing the five steps in the engineering design process and relating them to our robot project.

1. Ask
After dismantling their products, students were set with the task of considering how the parts could be used to design a robot of the future. Students needed to ask themselves what kind of problem they might foresee being solved by a robot. I stressed the importance of considering the problem first and then thinking about how this machine could help solve that problem.

2. Imagine
Students described the specific function the robot would be designed to fill. During this process, students discussed possible functions with other members of their group. These discussions were rich in higher-order thinking and problem-solving.

3. Plan
The design was to be planned out in students’ sketchbooks by looking at the parts prior to assembling. Students had to share their proposals with me before proceeding, so I could ensure that they were using this vital step of the design process.

4. Create
I created two different supply stations in the classroom. One station held the tools, wires, safety goggles, screws, and disposable gloves. Another station provided a place for the wireless glue guns to be charged. I kept the glue gun on my desk, so I could remind students of the necessary precautions to take before they used it.

Students also had access to a storage closet full of found objects and embellishments. Some students were “purists” when it came to creating their robots and enjoyed the challenge of only using parts taken from computers. Some students exchanged parts with one another. During the creation process, students took ownership of their designs, and as the robot began to emerge, they interacted with the “personality” of the robot.

As students began the assembling, they encountered new problems to solve. Attachments were made  by gluing with hot glue, wiring or screwing parts together. Students quickly realized the importance of balance when it came to the stability of the machine, as one of the requirements was that the robot had to be freestanding.

Tech Support Staff Visit
Next, I invited a member of our tech support staff to come and observe students working and to answer any questions students might have about the function of the components they were using. Some students had already realized that certain components were magnetic, and incorporated that function into their designs.

It was never my goal for these works of art to actually be mechanical; however, when one student brought in a radio-controlled vehicle that was no longer being played with at home, I allowed them to extend their project beyond the criteria. They dismantled the body of the car and attached the motor and wheels to the base of their robot. This was not a simple process as they had to adapt it and rewire the antennae in order for the signal to work. Once it was complete, the whole class followed it down the hall to the office to show it off. 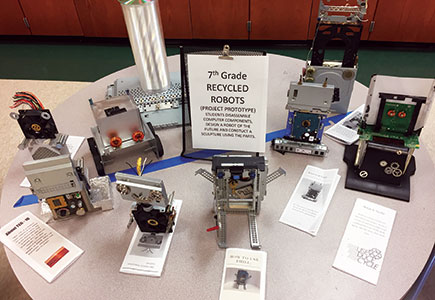 Instructional Manual and Infomercial
Once the prototypes were complete, I instructed students to take photos of their robot for a trifold instruction manual that they would design and print out. They researched the language of other product instruction manuals online to make it more authentic. Some students chose to offer the instructions in more than one language.

After taking photos and making the instruction manual, students designed an infomercial for their robot prototypes using video-editing software. This audio-visual component, in addition to the written manual, provided two useful technology components to the lesson.

Presentation
Finally, students were ready to present these amazing inventions to their peers. The presentation included the robot, the instruction manual, and the infomercial. For this phase of the lesson, I invited administrators in to see the products and to witness the learning. Afterwards, these robot prototypes were exhibited in the art display case in the school lobby for all to see.

As we educate these future dreamers, thinkers, and doers, we need to be open to new ideas and dream up new ways to get them to think, plan, and make. Sometimes our inspiration might be found in an article by a colleague or after attending a workshop, but sometimes, it might be found in our classroom trash. 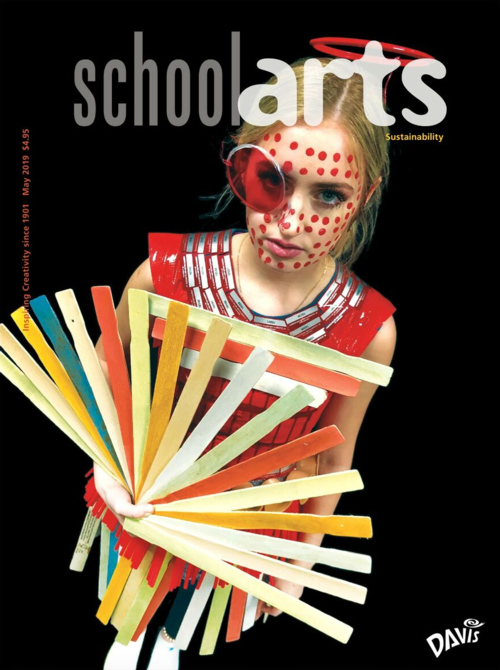 Sustainability and environmental issues are highlighted through a variety of lessons that use recycled, upcycled, or renewed materials. Students compete in a fashion art competition and design clothing from sustainable materials; utilize recycled computer parts to build their very own robots; create Picasso-inspired cardboard relief sculptures; and more.