Many schools regularly stage musicals. Their staging invites creative art lessons that can complement musicals’ themes and songs. For several years, I coordinated art lessons and curriculum initiatives with eight high-school musicals in the form of lobby displays, cafeteria displays, and projects. Museum educator Linda D’Acquisto describes how students can tap into their creativity by producing museum displays. What she describes is similar to the musicalinspired displays we created in our school lobbies and cafeteria. 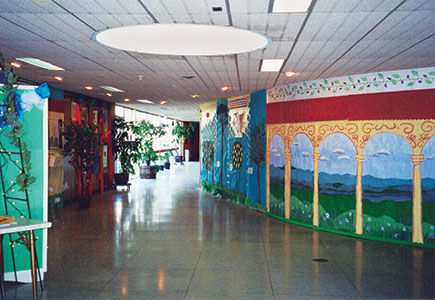 A Mediterranean village mural, setting of The Boys from Syracuse,
in our school’s front lobby.

This article’s title was inspired by Stephen Sondheim’s song “Putting It Together” from his musical Sunday in the Park with George. The song’s lyrics describing how the “art of making art is putting it together,” serve as inspiration for us each year.

Lobby Displays
The musical Carousel inspired us to simulate a carnival atmosphere in the lobby. A mural backdrop outside of our auditorium featured carnival attractions including a carousel.

For Bye Bye Birdie, our front lobby became the fictitious town of Sweet Apple, Ohio. The guidance office was the Sweet Apple Music Shop featuring 7" 45 RPM records with the various songs from the Bye Bye Birdie score. One key scene in Bye Bye Birdie takes place in the old New York Penn Station, which we depicted in a mural.

For The Music Man, we did projects tied to the Edwardian period, including a mural of a typical house. For another Americana musical, Hello, Dolly!, we capitalized on the 1890s Victorian setting and the Hudson River Valley.

Into the Woods displays capitalized on fairy tales and the woods. Our back lobby featured a painted mural of the woods with fairy-tale characters. People congregated there to greet cast members after performances and take photos. The display case became “the woods” with artificial trees. We also decorated cafeteria windows with transparencies simulating stained-glass that featured fairy-tale characters.

Reflections
Over the years, our displays directly impacted thousands of audience members, and dozens of students participated in their creation. The lobby artwork was effective in creating an appropriate atmosphere for people as they entered the school to attend our shows. Like magic, paint, paper, and other materials enhanced the overall presentation of our musical productions. Musicals can inspire artwork that transforms your school lobby or cafeteria. We did it and so can you!

I dedicate this article to the memory of my high-school art teacher, Richard Alan Lupo.

Keith Mason, a New Jersey art educator, advocates for the arts through his publications about musicals in the curriculum. kmason369@hotmail.com 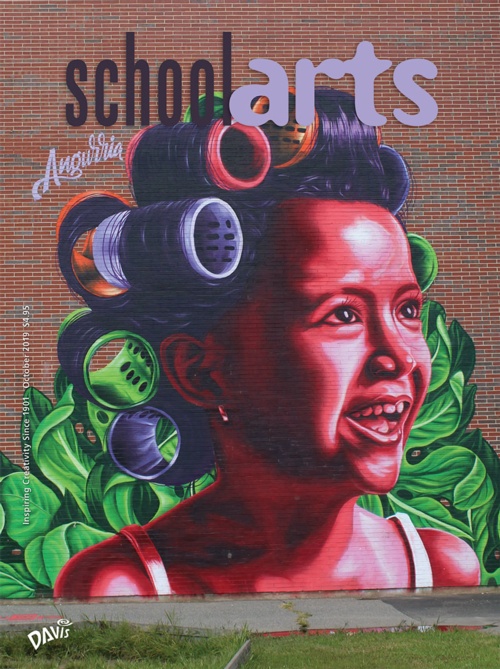