The Piece of Cake Cupcake Factory

This past year, I was determined to introduce my students to more contemporary artists. During my research, I became intrigued with artists who work collaboratively, such as Red Grooms and the Ruckus Construction Company. Red Grooms is a sculptor who uses wood, nails, papier-mâché, paint, and a team of other artists to create amazing installations. Studying his work and methods inspired me to create a room-sized papier-mâché art installation with my students.

Introducing the Challenge
Before students arrived, I stacked up all of the materials I had gathered for the project in a huge pile in the middle of the artroom. As students entered the room, they looked confused but intrigued. We gathered around our smartboard to watch a documentary film about Red Grooms titled Sunflower in a Hot House. After discussing the film, I demonstrated the basics of papier-mâché. I then pointed to the stack of cardboard, old newspapers, and other materials and issued the challenge:  Work together to turn our artroom into a Grooms-style art installation using these materials. Students were excited but unsure how we would accomplish such a monumental feat. 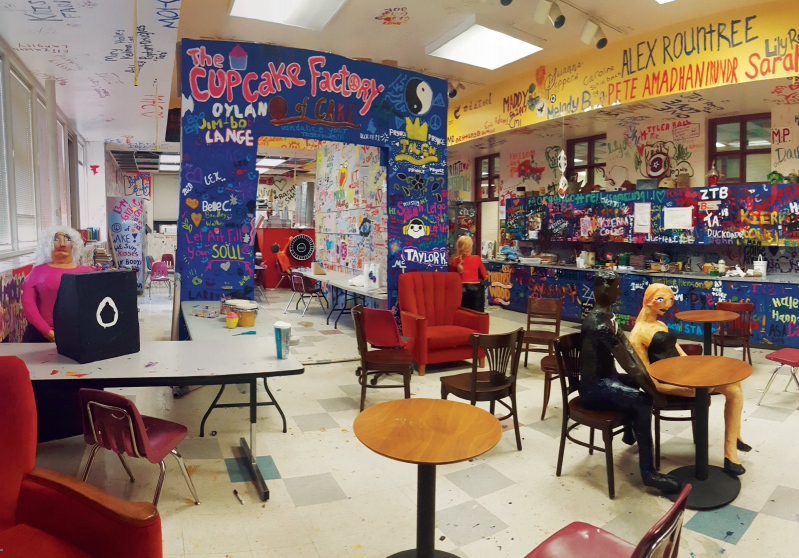 Students transformed their artroom into a Grooms-style cupcake factory, complete with papier-mâché employees, a storefront, a café, and a stage for entertainment.

Choosing an Idea
We discussed what it means to collaborate on a project and the theme of teamwork became our mantra. I told students that they could do anything they wanted, but it had to be school-appropriate and everyone had to agree on the idea. To arrive at an idea, students brainstormed individually and in small groups first, then in bigger groups, and finally as an entire class.

By the end of the first week, we narrowed our list of ideas down to five and voted. Our winning idea was to convert our classroom into the Peace of Cake Cupcake Factory, a functional business and entertainment venue that sold papier-mâché cupcakes, as well as real cupcakes.

Creating the Cupcake Factory
To create a cupcake factory with a storefront, students decided to use cardboard and poles to create walls separating the kitchen from the showroom. Next, they made a list of figures they wanted to create from papier-mâché: seven employees, two musicians, and four customers. We also decided that each student would make at least two original cupcakes.

To broaden the reach of the project, students invited teachers and students from other subjects to join us and collaborate on our project. Of special interest to everyone was pulling in the culinary art classes so we could have real cupcakes, too!

Growing Collaboration
As the project progressed, we decided to “brand” our cupcake factory. I gave some students the assignment of creating a logo for our business. Once we had a logo, we made t-shirts and flyers and hung them around school. The flyers read, “Peace of Cake Cupcake Factory Grand Opening, April 11th!” Word was out and a  buzz was going around our school. Everyone began asking about the Cupcake Factory. Students invited other classes to join us at the grand opening. By the end of the project, we had the culinary arts, marketing, audio-visual, science, metal fabrication, and special needs classes involved. For the grand opening, some students also contacted their friends who play music to come and entertain the audience.

Reflections
The best part of this project was how it strengthened students’ communication skills, especially their ability to share ideas and work with others to achieve a common goal. The project also taught them that there are multiple ways to do things, as well as the art of compromise and compassion. Finally, I noticed a family vibe develop in each class that I’d never seen before. Not only did students impress me, they impressed themselves! At the grand opening, I could see pride on all of their faces. The Peace of Cake Cupcake Factory will be remembered in our school and community for quite some time.