Students watched and listened to Norman Akers as he discussed color theory and technique while he painted. He also told them personal stories and made connections to Osage culture and history. In late October, students met in the library to see some of his collages and prints. Akers stressed that the Osage are a forward-looking people, and that the Osage language is in the midst of a robust revitalization effort.

In 2015, I directed students in painting a mural attempting to depict Osage imagery, culture, and stories. Though our intent was to honor our hometown’s original name, Wyota, we missed a key element—actual Osage input. We thought our actions were respectful, but they appropriated culture and reinforced falsehoods.

Fortunately, the building was sold and the mural was painted over by 2019. Something else happened that same year: My awareness of culturally responsive teaching was transformed through networking with educators across the country.

Collaboration with Norman Akers
In 2020, tribal authorities in Pawhuska, Oklahoma, granted us written permission to use the Osage seal on a mural we created for a summer school project and on a land acknowledgment plaque composed by tribal citizens. Our success inspired us to take this concept further by collaborating on a mural with a member of the Osage Nation.

In 2021, the Missouri Arts Council renewed an artist-in-residence grant for the Lebanon School District. Abby Birhanu, a fellow art educator, suggested we reach out to University of Kansas painting professor Norman Akers. Abby had worked with Akers to help St. Charles High School students make connections between their culture and that of the Osage Nation. To our delight, Akers agreed to the residency.

About the Artist
Norman Akers grew up on the Osage reservation in present-day Fairfax, Oklahoma. He attended Oklahoma State University and completed his MFA at the Kansas City Art Institute. He began his professional career teaching at the Institute of American Indian Arts in Santa Fe and working as a studio artist. His work explores issues of identity, Osage storytelling, culture, and relationships with people and land.

Learning about the Osage
We prepared students for Akersʼ arrival by showing examples of his work and reading a version of the Osage creation story he sent. For the Osage, the elk is tied to storytelling traditions and creation. The design Akers planned for our school included a bull elk calling to the Four Winds under a canopy of the sun, moon, and stars. Next to the elk, a large crawdad would be shown bringing up a piece of the earth that becomes the dry land of the Osage—the same land where Lebanon High School sits.

The design also depicted a red oak tree with acorns focusing on what is sent into the future and a ribbon of pink shoreline recalling the Osage skill with ribbon work used to adorn ceremonial dance clothing. The design references a richly layered story passed down through generations of oral tradition.

Preparing the Mural
Weeks before painting began, panels were constructed in Kansas and delivered to Lebanon High School. Students primed all of the surfaces to prepare for installation in the hallway that connects two wings of our building. Next, Akers used transparencies and a grid to transfer his design to the primed panels. A prefabricated hanging system allowed the transparencies to be easily installed flush to the wall.

Learning from the Artist
Students watched and listened to Akers as he discussed color theory and technique while he painted. He also told them personal stories and made connections to Osage culture and history. In late October, students met in the library to see some of his collages and prints. Akers stressed that the Osage are a forward-looking people and that the Osage language is in the midst of a robust revitalization effort.

The word osage is an English mispronunciation of the French attempt to spell “Wazhazhe.” We discussed some local place names that might be tied to the Osage. Akers said the name of the Niangua River is likely of Osage origin as nee is the word for “water.”

Though Akers doesn’t think of himself as an activist, much of his work is intended to encourage political dialogue. In collaged prints, figures from American currency are placed in flying saucers juxtaposed by sacred animals and crumpled plastic water bottles. Maps with dissolving borders serve as the background. Questions about environmental stewardship and colonialism hang unanswered.

The Finished Mural
Akers’ finished mural features wonderful play between modeled focal points and flat, colorful shapes. The Creation references swirl around a magnificent bull elk as he calls to the Four Winds. None of us will ever forget the lessons and conversations of this rich learning experience.

Reflections
One student reflected, “[Akersʼ] mural is based on the beliefs of the Osage people. The elk is the centerpiece and is a religious figure…I kind of understand that some people...forget that this was originally their land. I think that the mural is a reminder that we need to remember and respect Native Americans.”

Akers’ mural adds beauty to our hallways and invites viewers to reflect on our relationships to the land and to other people. He brought perspective to this process that was otherwise unavailable. 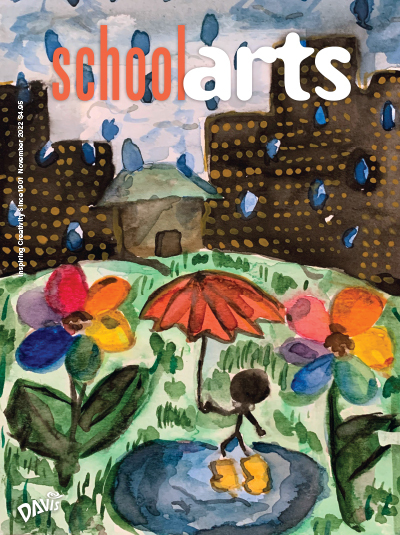