I saw how collaborative public art could transform the lives of people in neighborhoods who might not have much direct experience with visual art. Also, involving local residents in the design process gave them a voice with which to express their ideas and an increased feeling of ownership in their neighborhood.

A student poses in front of her completed portrait.
Student Pedro and his family pose in front of his portrait in the community garden.

More than twenty years ago, a friend invited me to join her on a mural tour in Philadelphia. I had recently received my MFA from Maryland Institute and developed that delicate balance of creating my own work in the studio and guiding my art students in the classroom. I began to show my work in Philly galleries and envisioned a future as a participant in that world…but that mural tour changed things for me.

I saw how collaborative public art could transform the lives of people in neighborhoods who might not have had much direct experience with visual art. Also, involving local residents in the design process gave them a voice with which to express their ideas and an increased feeling of ownership in their neighborhood.

The Role of Research in Mural Work
The success of collaborative public art design depends on a commitment to research. Who will see the work? Who will be involved in its creation? What about funding? What qualities does a proposed site have that need consideration in the design? By researching these variables before design work occurs, my role has been to guide artists, focus groups, and students to create meaningful images that suit their location.

Example in Practice
An early example of this process is found on the old guard lock bridge in Reading, Pennsylvania. I was invited to coordinate a project that would illustrate the important part the Schuylkill River and its canal network played in the city’s history. I spent hours speaking with local historian George Meiser and poring over images of the city from the nineteenth century.

The project was initiated by the local Boys and Girls Club with the goal of sharing this history with the city’s youth as they collaborated on the mural that would feature a portrait of a contemporary youth introducing a local historical scene. Community paint sessions were scheduled at local youth centers throughout the city. More than one hundred painters attended each session, and each one of them learned something new about their city’s historic industrial waterfront.

Together we painted history on polyester interfacing, a technique that allows one to fabricate a mural anywhere and install it on-site. I invited the young painters to picture themselves standing in front of the finished work and imagine what they would share with the viewer and what gesture would lead the viewer to the image.

Several of these portraits were featured in the finished work. The local river trail development effort added an interpretive panel in front of the guard lock bridge with its murals, allowing all who visit the site an opportunity to learn about this place as presented by the youth through their paintings.

Mural Work Transformed to Curriculum Practices
As I began to coordinate more projects throughout our county, I was invited to develop a new elective in our school’s art curriculum. As a complement to the students’ other electives, the Public Art Workshop taught them the importance of research in the production of public art. We partnered with the local community’s revitalization foundation in the development of a mural corridor, a collection of thirty murals located a block off our main street.

The satisfaction I have gained through this collaboration is beyond words. A number of the students in the workshop are underserved youth who struggle in many of their academic classes. One of the main goals of this class is to illuminate students’ understanding of the role of the visual arts in their community.

Hearing the positive comments from people passing by on the street makes the work real to these students. Whenever I am working on the mural corridor on a school day, I often see these same students. Hearing them brag to their friends that they helped with these projects is most gratifying. I hope this experience shows them how they can be contributing members of their community.

Today the mural corridor is a retreat for local residents as well as a draw for the entire county. The work is grounded in research and knowledge that makes a connection with local residents, illustrating their past and envisioning their future. The themes, sheer scale, unique artistic styles, and bold colors attract viewers, speaking to the power of the visual arts. 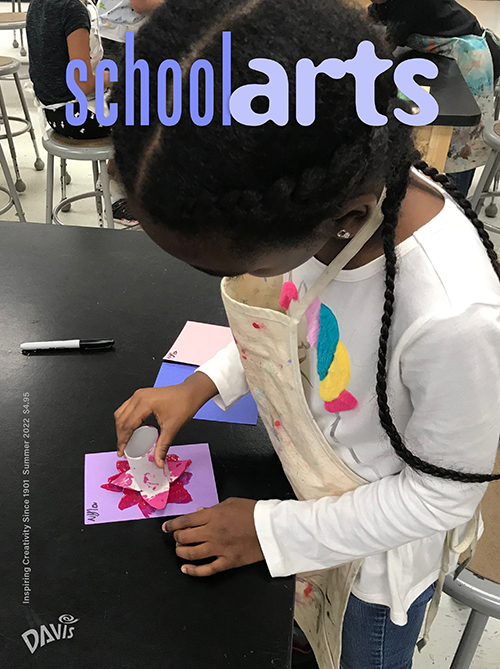