Combinatory play was defined by Albert Einstein as “the act of opening up one mental channel by dabbling in another.” Considering the value of play in promoting productivity and creativity, my Essential Question was: How can a lesson in linear perspective become a way for students to dabble in environmental science, connect to real-world scenarios, and promote interdisciplinary problem solving while including an element of play?

Inspirations
I began with a simple lesson in one-point linear perspective. Students drew a series of boxes relative to the vanishing point in the center of the page. Then they watched a video demonstrating how, in aerial perspective, the tops of the boxes drawn could be transformed into the roofs of skyscrapers. Students connected this view to how cities are drawn in superhero comics.

From there, I researched sustainable city design and discovered a website for a student design competition (see Resources). I also found a video explaining sustainability through the use of a children’s fairy tale. Those resources inspired a lesson that would prompt meaningful conversations and integrate environmental science.

Infrastructure
The class was divided into groups and instructed to brainstorm ideas for creating a board game based on sustainability. We defined sustainability as a goal that broadly aims for humans to safely coexist on planet Earth over a long period of time. After this session, students made a list of basic structures needed for a city’s operation. This list became their criteria:

Design Teams
Each student in the group was assigned a specific role based on actual occupations involved in city planning. I found a quick reference to positions in construction (see Resources) and assigned those roles to students.

Each group received a list of prompts to discuss, including: How can you design a city to be sustainable? How can you be sure that it is environmentally safe to live there? and What factors can keep it economically affordable?

Next, students were asked to create game objectives and instructions, based on the theme of sustainability. They were encouraged to look at the rules and instructions from familiar board games as inspiration when necessary. (One game designer created penalties for not recycling and rewards for saving energy!)

Construction Ahead
Once the rules and objectives were established, students constructed their board games using surfaces such as roofing felt, canvas, and cardboard. For game pieces, they repurposed materials such as bottle caps, discarded plastic, or other found materials.

Students were reminded to refer to the criteria as they planned and designed their games. Any student who appeared to be dominating the discussion or project design would be gently reminded of everyone’s agreed-upon responsibilities.

Completion
Each group played their own game to determine if any changes needed to be made. Once this testing stage was complete, students presented their finalized games to the class.

The next day, students played each other’s games for ten-minute intervals. They used sticky notes to leave behind constructive criticisms and positive comments.

Reflections
So many aspects of this lesson created new ways for students to learn by problem-solving. There were minimal classroom behavioral issues during this lesson; students were all invested in the project and respectful of the other members of their teams. Each time this lesson was taught to a new group of students, their growth and engagement was evident. The display of the former class projects helped to inspire each new class of sustainable city game planners, but their originality and creative problem-solving through the use of combinatory play was what truly inspired me!

Melody Weintraub is a freelance artist, adjunct lecturer for the University of Tennessee-Knoxville, and retired art teacher who is a frequent contributor to SchoolArts. MelodyWeintraub@Gmail.com 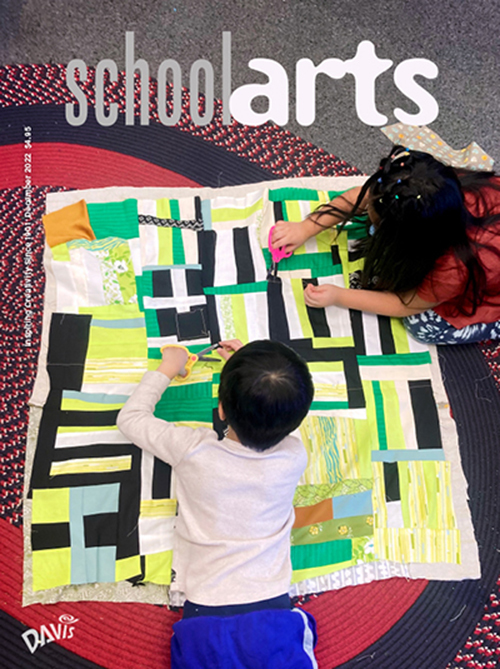 Art teachers foster a collaborative environment through group projects. Young students learn to use a sewing machine and join their individual fabric squares into a class quilt, elementary students participate in a school-wide effort to learn about biodiversity protection efforts in Bioko, middle-school students connect to real-world scenarios and interdisciplinary problem-solving to collaboratively design games, and high-school students team up with a former art student to create a mural that celebrates all subjects and disciplines.