Art from the Heart

Elementary
By Jane B. Montero and Rob Garrett, posted on Aug 3, 2022

On February 24, 2022, Russia invaded Ukraine. As art educators teaching elementary students, Jane Brumfield Montero (Michigan) and Robb Garrett (Poland) created an art exchange to spread cheer to students during this troubling time. Students expressed their deepest feelings and shared words and pictures about themselves, their own cultural identities, and their solidarity with Ukrainian children.

How many international children’s art exchange projects do you know of that began as a love story? Hereʼs an exchange between America and Poland that was motivated by love, friendship, and solidarity.

Students expressed their deepest feelings and shared words and pictures about themselves, their own cultural identities, and their solidarity with Ukrainian children. The results spoke to the honesty, vulnerability, and compassion both groups of students felt towards each other, despite never having met.

Project Beginnings
Jane and Rob are moderators for the Facebook group Online Art Teachers K12 (OATK12), but have never met in person. On February 26, Jane messaged Rob with the idea for the project:

Rob, an idea just came to me. I’m wondering if I could have my fifth- and sixth-graders send art “from the heart” to your students? I’m thinking of small postcard-size artworks. Maybe we could have an exchange-type of project.

Rob replied: That sounds like a lovely idea! I have thirty-two fifth- and sixth-graders and about the same number of fourth-graders. We are doing some Marzanna Festival works over the next couple of weeks (our first day of spring celebration) and I could easily add A5-sized artworks to send to you.

This year, Iʼm showing students the work of Ukrainian folk artist Maria Prymachenko alongside Vincent van Goghʼs sunflowers (the sunflower is the national flower of Ukraine, and just about every garden plot in Poland includes sunflowers during the summer).

The final project became individual hexagons with drawings on the front, and students’ first names, ages, hobbies, and a description of what they drew on the back.

From Michigan to Poland
Rob was touched that a colleague and her students in America thought of his students in Poland. Many of Robʼs students in Gdynia and their families were directly involved in supporting these Ukrainian families. The United States soon became the front line of humanitarian support for Ukraine. So, when Rob introduced the project to his classes, it was natural for him to frame it as a “love message” from the children of Dexter, Michigan.

It also seemed natural for the Polish students to reflect on how they might express their gratitude through their art. They wanted to share something of their feelings, lives, and culture for students they never met but felt connected to.

Celebrating the Hexagons
Each school excitedly received the finished hexagons. At Creekside, Jane held a hexagon gallery presentation for her three participating classes and invited the district superintendent, a local newspaper journalist, and the publicity director for her school district.

At the American Elementary School in Gdynia, Rob held tabletop viewing and discussion sessions with each participating class. He unwrapped the parcel of artworks, set them out on a large group of desks, and students pored over them.

After students engaged with the artworks and messages, Rob hung the artworks, along with information “postcards” and QR codes to online resources, from the ceiling in the communal space of the building where he teaches.

Reflections
Only time will reveal the full impact of this experience, but Jane believes that building relationships is at the heart of all learning: “When we take time to listen and learn from others, we learn to become more empathic human beings.”

Rob believes two beneficial strands emerged: one at the art-making stage and one at the art-receiving stage. When Robʼs students created their artworks, they did so with a new consciousness because they were making art for a specific, distant audience. They knew their artworks would be understood as representing them and Polish and Ukrainian culture. They asked questions such as: What do I want the Creekside students to know? and What should I show so that someone understands something specific and unique about Polish life? Students gained a deeper understanding of how art can convey powerful personal messages across time, space, and culture.

The second strand emerged when students studied the Creekside artworks and read students’ messages. The artworks opened studentsʼ eyes to the many cultural differences and similarities between the groups, and they experienced a strong sense of connection through the shared acts of giving and receiving.

Jane B. Montero is an art teacher at Creekside Intermediate School in Dexter, Michigan. MonteroJ@DexterSchools.org

Rob Garrett is an art teacher at the American Elementary School in Gdynia, Poland. Garrett.Rob@Gmail.com 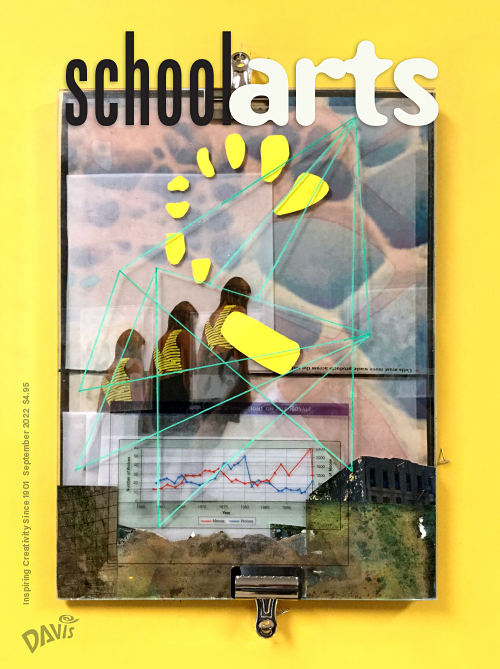 Art teachers guide students through activities that help them to learn about their peers and encourage self-expression. Young students create playful self-portraits that share how they are feeling about the first day of school, elementary students collaborate in a surrealism-inspired game of chance, middle-school students assemble name tags for every teacher in their school, and high-school students express their personal interests through colorful cell phone wallpaper artworks.