SchoolArts is currently compiling a collection of high-school articles that focus on contemporary art and artists. After choosing the articles, we grouped them by the Big Ideas they shared. Identity was one of the themes that predominately appeared, and it’s a fitting theme with which to start the school year. It is personal and engaging to students of every age, and the artwork produced helps teachers learn more about their students and their interests.

There is an engaging series on Netflix, adapted from a book of the same title by Emily Spivack, called Worn Stories that would make a good catalyst for a choice-based lesson that focuses on Identity. In the series, people tell their stories about a specific piece of clothing that is meaningful to them and expresses their identity. I would preview any clips you might want to show your students, but such a lesson would lend itself to students having unlimited choices for a wide range of responses. The series also includes eclectic and charming animations made with collage, felt, and clay.

Trying to decide what piece of clothing was meaningful for me made me think of high-school band and the uniforms we wore that made us look like toy soldiers. (I played clarinet.) I can’t think of any other uniform I ever wore. Ours were all wool (in Louisiana!) and we had to polish our brass buckles and stand for inspection. But I loved it.

Why was the uniform meaningful? It represented the band, which gave us a community where we were accepted. We hung out in the band room before and after school, played and traveled together, and had fun. (Our school’s stadium was across the street from the fairgrounds. We could get into the state fair for free if we wore our uniforms!) If you were in the band, you could be with the same people for three or four years and really get to know each other. It is remarkable how many people I know now who were in band when they went to high school.

This month, we offer a number of approaches to studio lessons in which students can consider and share their identity. When we begin to acknowledge our differences and share our stories, we realize the many ways in which we are similar. What stories will your students tell? 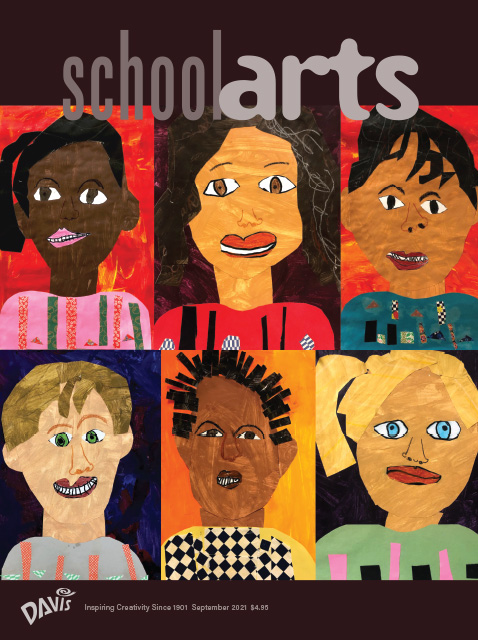 Art teachers inspire students to consider all layers of their identity and to celebrate their differences through a variety of exciting lessons. High-school students use photography to create abstract representations of their favorite icons, middle-school students envision their future selves while illustrating college IDs, elementary students celebrate their differences through self-portrait collage paintings, young students learn the value of collaboration while assembling a mural that combines all of their artworks, and more.