For art students, experimenting can be one of the most difficult tasks, especially when they are focused on learning basic techniques. In an attempt to approach inquiry-based learning while working on foundation skills, I’ve turned my emphasis toward a variety of cross-curricular approaches.

Central to the idea of inquiry is the scientific method, which mirrors the artistic process and is the perfect organizational strategy for thoroughly investigating ideas while reflecting on their potential applications.

To practice this concept, my students conducted a guided art experiment by creating alcohol inks using familiar natural materials. Students worked in small groups of four or five and were tasked with identifying a variety of objects to produce brightly pigmented inks. Students worked through each step of the scientific method and documented their findings by creating a visual lab report.

Questioning
For this experiment, I asked students to consider how artistic materials are made and what other methods can be used to create them. Students had recently finished a project using india ink, which made this media the perfect material to investigate. Students identified the origins of ink and defined terms such as solvent, pigment, vehicle, and binder. We discussed a variety of ink types, including alcohol ink, which produces bold, permanent pigments.

Once students were familiar with the media, I asked them how they might be able to craft their own. As the method of making alcohol ink is relatively simple, students turned their inquiry towards locating sources of pigment. They predicted that objects such as fruits and vegetables with colorful juices or bright skins would make great sources of color, as they stained naturally on their own.

Hypothesizing
Each group was assigned a color and brought in three different natural materials with which to make their ink. Students documented what they could observe of each material in its natural state and recorded what they had learned about ink. Combining previous knowledge and direct observation, students worked within their groups to create a hypothesis determining whether their material would produce a functional, saturated ink.

Materials and Methods
Students prepared their materials by cutting, grinding, and juicing. I provided isopropyl rubbing alcohol to serve as both a solvent and vehicle for their simple alcohol inks. They placed their material into glass vessels, and poured in the rubbing alcohol. From there, students made observations as to what happened immediately to the color of the liquid.

Some objects, such as beets, produced vivid pigments right away, while other objects, such as lemon and orange peels, remained clear. After recording this information, students covered their jars and placed them in a shallow tub with an inch of hot water overnight to accelerate pigment dispersion.

Data and Observations
The next day, students observed their liquids again and recorded any changes or similarities that occurred over the course of twenty-four hours of soaking time. Students then filtered the new inks using coffee filters and tested their potency on watercolor paper. Some materials produced pale pigments, while others resulted in rich color. Among the best materials included grapes, beets, lemon peels, red cabbage, and spinach.

Analyzing
After the experiment concluded, students analyzed the data they collected and determined the saturation of their pigments, whether their pigments separated or remained suspended in the alcohol, and the translucency or opacity of their inks. Students also compared the variety of inks created within their groups.

Conclusion
Finally, students concluded whether or not their original hypothesis was supported by their findings. Most groups successfully created at least one brightly pigmented ink, but more interesting to students were the materials that failed. These materials allowed students to reflect on their methods while seeking solutions for future success. To tie together all of their learning, students created a visual lab report. They used their handmade inks to embellish their hand lettering and illustrations and also designed creative layouts to effectively display their data.

While the lesson was focused on following the scientific method through a guided art experiment, students now have the tools to lead their own artistic explorations while thinking critically about their methods. 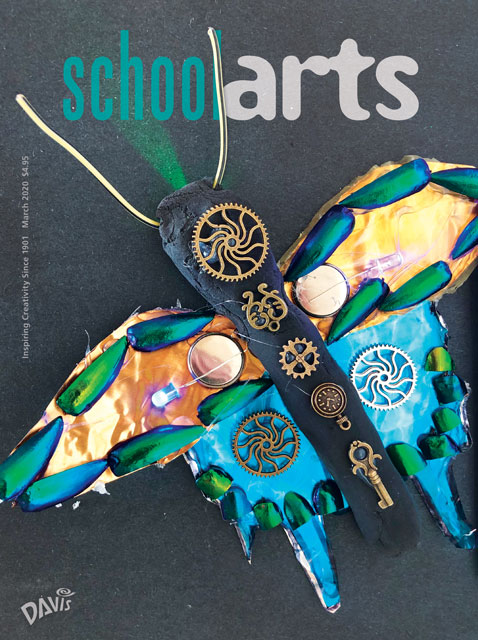