In the book The Color Monster (Sterling, 2012) by Anna Llenas, a child helps a monster sort out its feelings. No feeling is judged or suppressed— they are all identified and acknowledged. I designed a lesson based on this social-emotional learning book to help students think about feelings, connect them to color, and learn to express emotions using technology and art.

In the process, they explored color theory, stop-motion animation, and movement as they problem-solved collaboratively.

As I guide you through this lesson, you’ll find that I was able to identify all of the feelings in the book myself.

Identifying Feelings
The book identifies six feelings and their corresponding colors. Red represents anger; green is for calm; black is for fear (I switched this to orange); blue is for sad; yellow is for happy; and pink is for love (I switched this to purple). The two switches I made allowed us to work with three primary colors and three secondary colors.

How Are You Feeling? ANGER
I set out banner paper and markers on each of the six tables in my art room with color-coded tents naming the six emotions from the story. After we read The Color Monster, students sat down in groups to doodle about the emotion labeled at their table for the duration of the song “Colors” by Kira Willey. When the song ended, the groups moved to the next table until everyone had doodled about all of the emotions.

At one point, a fight broke out at the red table. The drawings about anger brought to the surface some unresolved conflicts from recess. I lost control of my lovely art class when anger flared up and demanded attention. So, we sorted it out.

How Are You Feeling? CALM
Next, we began creating the monsters from cardboard I collected. The plan was to make the monsters with moveable arms, legs, and eyebrows to express emotions. All of the little pieces needed to be cut out, collected, and stored in students’ paper pouches so nothing was lost. We spent a lot of time organizing our workflow so we could keep track of everything throughout the process, since thirdgraders are still developing their executive functioning. Some students struggled with using scissors to cut through the cardboard.

Both of these factors limited their ability to approach the monster design creatively. So, I backed off on my expectations for individualized solutions and focused on staying calm and organized so the monsters would have all the parts needed for painting. We labeled and counted every item as we placed them in the pouches.

How Are You Feeling? FEAR
The monsters were intended to be monochromatic paintings. Each student would work with a single color for the base, and layer in tints and shades as they created visual texture. I needed a plan that helped students agree to a color they didn’t necessarily choose and avoid the peer pressure that would inevitably arise as they saw other’s choices. I didn’t want them to think some feelings were okay to explore while others weren’t. I wanted to communicate that all feelings are valid.

I set up my six tables with one paint color on each. I then explained to students that “Just like you don’t always choose your feelings, you won’t get to choose your color. You’ll randomly pick from this basket and work with that color.” The basket was filled with up to four of each color. Their reaction reassured me that they thought it was fair and even a little exciting to see what they would get. We spent the rest of class painting our monsters.

How Are You Feeling? SAD
We used our next class to discuss how expressions in the face show emotions. We played with the eyes, mouth, and eyebrows to see if we could communicate the emotion each monster represented. We used brass fasteners and wooden skewers to poke holes and attach the arms, legs, and eyebrows.

Students were enamored with their monsters during assemblage. They kept calling me over to show me how cute their monster was. I agreed, but still felt sad because the final pieces were not showing as much individuality as I’d hoped. My students weren’t sad—quite the opposite. But my need for them to have more creative input drove me to make the digital extension a more significant portion of the lesson and push this project to a truly transdigital level where both physical and digital aspects would merge.

How Are You Feeling? HAPPY
After creating our moveable monsters, I introduced the digital part of the lesson. Students would collaborate in groups to create a stop-motion animation of their monster expressing their emotions through movement. The room was set up with six iPads, one at each table on a stand over white paper.

I placed buttons at each table designating written roles for each student during the process. The monster’s artist was also the director. This person communicated to the photographer and two animators what the movement would look like for the animation. The photographer took a photo after each incremental change was made in the monster. The animators listened to the director and made small changes to create the illusion of movement. Students were excited to turn an inanimate object into a moving, expressive creature.

How Are You Feeling? LOVE
A transdigital project has a physical art-making component as well as a digital one. The color monsters are moveable cardboard creatures with expressive faces painted with a color that represents an emotion. The stop-motion animation depicts these monsters, dynamically expressing emotion through movement.

Now comes the question of how to showcase both aspects of the artwork for viewers. A physical display would only tell half the story without a way to show the animation. This is where augmented reality comes into play.

Students designed a trigger image digitally from a template I created and a still frame from their stopmotion animation. After setting up the effect in an animation app (we used Eyejack Creator), a QR code was generated and added to this graphic. This would call up the animation when scanned, giving the viewer a chance to see both the physical and digital art simultaneously.

As art educators, we understand that creating brings joy and releases stress for ourselves and our students when we are tangled up with emotions. So, let’s take the advice from the Color Monster book and sort out our feelings in a colorful way. 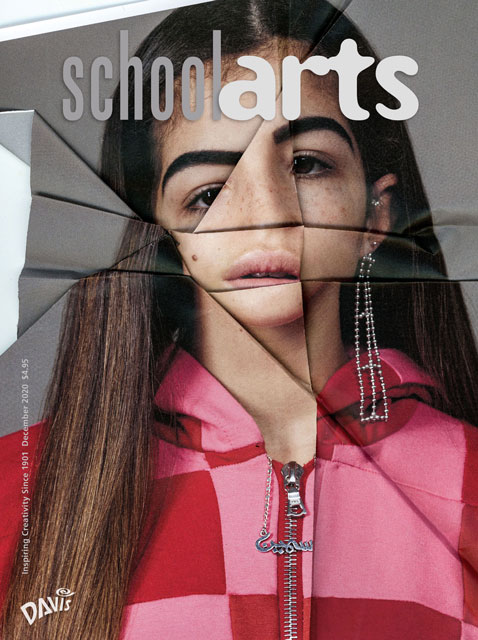 Art teachers share lessons that use apps, smartphones, tablets, digital cameras, 3D printers, and more. Many of the lessons in this issue contain both a digital and hands-on component. Students sculpt clay figures and bring them to life using stop-motion animation, collaborate to create and animate posable cardboard monsters based on emotions, use a 3D modeling app and 3D printer to create geometric accessories, and more.