Students discussed how what we might think of as trash can take on new life. Then, tying in geography, students used paper plates to create aerial maps of their sculpture parks using permanent markers and oil pastels. Because a park includes people, students had to design the space with visitors in mind. There had to be walkways and places for the sculptures to be built. Students also had to decide on a location for their park, considering the climate and other features. Creating this work with these extra factors in mind stepped up the possibilities for creative thinking.

You know that feeling when you’ve come up with the idea for a lesson plan, but, all of a sudden, it’s the day before you’re going to teach it, and you have to actually figure it out? Yeah, I know that feeling, too. I had it just a few weeks ago, the afternoon before my sculpture class. On Fridays, I have a group of fourth-, fifth-, and sixth-graders who elected to take Mixed Media Sculpture with me. It was Thursday night, and I was facing down a semi-resolved lesson plan involving found objects, assemblage, and...well, what else, I wasn’t yet sure.

Inspired by a Sculpture Park
Everything came together when I remembered that my loosely structured lesson plan mentioned Noah Purifoy, an artist I had stumbled across over the summer. I found a YouTube video that detailed his Outdoor Desert Art Museum in Joshua Tree, California, which dovetailed with our semester’s focus on found objects. The decision to make a park in the vein of our artist inspiration instantly imbued the project with more purpose, meaning, and design-level thinking. After a last-minute stop to the store for heavy-duty paper plates to use as sturdy bases, I was ready to teach.

Aerial Plate Maps
On Friday morning, students watched the video, talked about what might have motivated Purifoy to create his Outdoor Desert Art Museum, and discussed how what we might think of as trash can take on new life. Then, tying in geography, students used paper plates to create aerial maps of their sculpture parks using permanent markers and oil pastels. Because a park includes people, students had to design the space with visitors in mind. There had to be walkways and places for the sculptures to be built. Students also had to decide on a location for their park, considering the climate and other features. Creating this work with these extra factors in mind stepped up the possibilities for critical thinking.

Assemblages and Louise Nevelson
During the next class, I showed students a video on renowned assemblage artist Louise Nevelson. Students compared and contrasted Nevelson’s work with what they saw the previous week. During both classes, students noticed that the concept of a place designed for humans has different creative constraints than a sculpture made for viewing in a museum. They also noted some distinct differences between Nevelson’s treatment of found objects versus Purifoy’s. Students spent the rest of class digging through boxes of 3D materials for their sculpture parks, keeping their park visitors in mind.

Adding Signage
During our third class, I wanted students to continue their design thinking as we added signage to the parks. By this point, students were really invested in the work and had a distinct idea of what their park was about and who it was for. Class discussion indicated that their parks had a purpose. One student approached me to tell me that her park was for the “biggest foods in the country.”

The themes of the parks had been generated through the process of building, designing, and understanding the constraints of the materials. This made it an excellent opportunity to be intentional about how we could communicate these ideas to visitors through signage. It also helped me to understand how students conceptualized their work by what they chose to communicate to others.

Adding Figures
During our last class, I wanted students to address their park visitors while tying in some math. I drew two pictures on the whiteboard to demonstrate scale: one with a figure as large as a building and another with a figure small enough to enter the door of the building.

Through these drawings, I introduced scale and encouraged students to decide how they wanted to use this knowledge. If they chose to make larger figures, the sculptures in the park would seem smaller. If they wanted to make tiny figures, their park visitors would seem swallowed up by the sculptures around them. I gave students modeling clay and a handful of bendable materials, such as wire and pipe cleaners, and let them make their own decisions about how to construct their figures.

Final Reflections
By the end of these four classes, students created parks that were remarkably unique, thoughtful, and rich with design-level thinking. The inclusion of a “visitor” to the park was key, and as I reflected on my teaching of this lesson, I wished I had flipped it to start with the creation of a figure who would, in the end, be our park visitor. This would have allowed me to dive deeper into differences between art and design, the constraints that design imposes during the creative process, and it would have given a face to the amorphous “visitor” we were imagining throughout the project. But hey—not bad for what was once an undeveloped lesson! 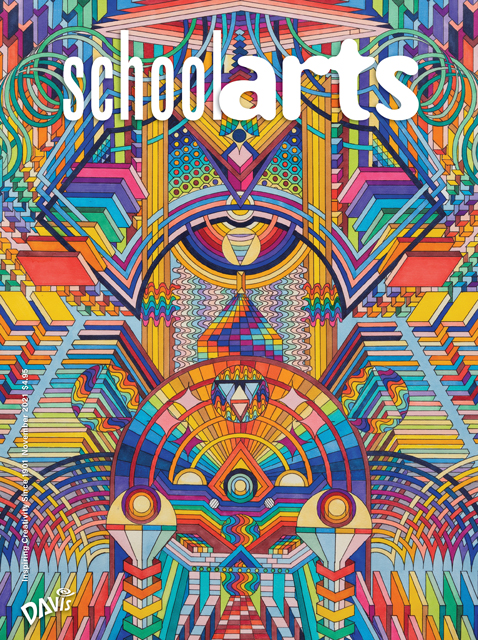