Having a great idea is one thing, turning it into a successful project is another. This was all uncharted territory, so questions abounded: How do I go about obtaining enough blank, white expandable phone grips at an affordable price? Once acquired, can they support our available drawing and painting media? What media will work best?

One day between classes, one of my students approached me and asked, “What are we gonna do next, Mr. Sacco?” The question took me by surprise because I hadn’t decided. “I’m not sure yet,” I replied. “But our next unit is functional art.” Her face lit up with enthusiasm. “Why don’t we do PopSockets?” My eyes widened. “What a great idea!”

Acquiring
Having a great idea is one thing, turning it into a successful project is another. This was all uncharted territory, so questions abounded: How do I go about obtaining enough blank, white expandable phone grips at an affordable price? Once acquired, can they support our available drawing and painting media? What media will work best?

I soon discovered that the price of the phone grips varied dramatically. After scouring the internet, I stumbled onto an overseas import site that sold them for about 25 cents each in lots of 100. Sold!

Experimenting
The phone grips arrived in a few weeks. Now I needed to figure out what media could be successfully applied to the slick plastic surface. After some trial and error, I found that applying a gesso base worked well. Then it was time to experiment with various drawing and painting media. Whatever I chose needed to adhere without smearing or running. It also had to be compatible with the application of an acrylic topcoat spray, which was necessary for protection and durability. Once completed, I wanted these pieces to last.

After testing, I found that most water-based media worked over the gesso. This included marker and acrylic paint. Colored pencil also worked well. With my media choices in place and a way to work on the surface secured, it was time to let my students know what was coming.

Creative Freedom
I announced the project by telling students where the idea came from. The student who suggested the project was beaming with pride as she saw the excitement on her classmates’ faces. I then showed them some commercially available phone grip designs and we discussed which ones were the most eye-catching and desirable.

We soon discovered that the designs with the most impact were the ones with strong focal points and background interest. This became our design objective. I decided to leave the choice of subject matter up to each student. I hoped that giving them the freedom to design for themselves would allow them to be fully invested in the project. And invested they were!

Students excitedly began to brainstorm. My requirement was for each student to create two actual-size designs in pencil. They showed me their two designs, and once we agreed on one, I gave them a choice: they could transfer their design to the surface of the phone grip or draw directly on it.

Next, students were ready to begin rendering. I provided a few pre-gessoed phone grips for them to experiment with, which helped with their choice of media. After that, it was simply a matter of rendering their designs with their preferred medium.

Protecting and Displaying
Once the designs were finished, I applied an acrylic protective coating. I sprayed a light first coat, gave them some drying time, then applied a heavier second coat using our technology teacher’s spray booth.

Many students wanted to immediately attach their newly designed grips to their phones, but I managed to pry a few away for display. I really wanted to show these off. I kept my display idea a secret from students to add to the surprise. I mounted them on inexpensive basic phone cases that I purchased from another overseas importer and I displayed them on small acrylic easel stands. Needless to say, students’ eyes popped when they saw these phone grip designs. It became one of my most popular projects ever. 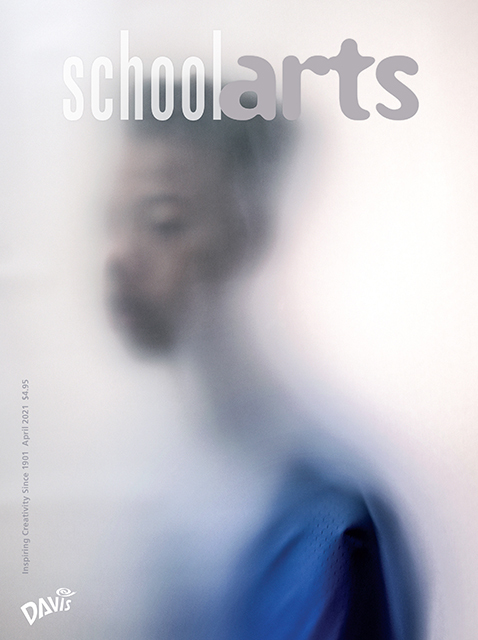