Flint, Michigan, has seen better days. Loss of manufacturing coupled with the Flint water crisis has taken its toll. In 1913, General Motors attempted to build 1,000 houses in one year for the influx of workers in its bustling factories.

City Street Accordion
“That is the house where the mother and her daughters died in a fire.” “That house is next to my house.” Students made these comments as they studied the vacant house photographs, the activity that began most Planting Acorns lessons. Referring to the photos, students etched a house in pieces of printing styrene. Doors, windows, siding, or bricks were drawn in. Then the house was cut out and printed on white paper with black block-printing ink.

From the cut-off scraps of styrene, students imagined, drew, and cut out things that might be seen on a vibrant city street: trees, flowers, cars, trucks, and people. The cutout shapes were then printed on the paper with the black printed house, this time using colored ink.

I bound the finished prints into an accordion-style book. The book was put on display at a local coffee shop, standing and opened up, creating the look of a lively city street.

House Planters
I enlarged the house photos on a copy machine, cut them out, and, using a craft knife, also cut out the doors and windows. Students laid one of the house images on a slab of clay and cut around it with a needle tool, creating a house silhouette. They traced in the doors and windows with a sharpened pencil and drew in siding or bricks, curtains, and flowers. Three more cut slabs were attached for the sides and one for the base (with a drainage hole), completing the planter.

Small clay cars, trucks, and people were made in clay to complement the planters. After bisque-firing and glazing, potting soil was added. An acorn or a flower was planted in each.

Inflated House with Flowers
From a roll of 3-mil plastic sheeting, I laid out and cut seven pieces (four sides, a base, and two pieces for a peaked roof) to create a house. Students worked together, cutting 2" (5 cm) wide clear packing tape and taping each section together. Using a square box fan, we inflated the house, cut a slit for a door, and went inside. The inflated house generated much excitement among students. They cut flowers from colored rolls of thin garbage bag–type plastic and taped them to the outside of the house.

Thinking Outside the House
Throughout Civic Park, the windows and doors of vacant houses are covered with plywood. Often, the plywood is painted black with white panes to create the illusion that the house is lived in to keep out vandals. I selected one of these vacant houses and got permission to use it in a Planting Acorns project.

To make the house look even more like an occupied residence, students created people, pets, and other signs of life. For the human figures, students traced around each other on large pieces of white foam core board, then painted the figures and their other additions with acrylics. I cut out the painted silhouettes with a scroll saw and stapled them to the black-painted plywood windows and door of the vacant house. Now it appeared that a cat was reclining on the back of the sofa looking out the front window, a girl looked down from an upstairs window, and a man waved a friendly greeting from the front door.

The brick chimney had long since fallen into the house. I salvaged some bricks, and students painted flowers on them with ceramic glaze, which I fired slowly in a kiln. The repurposed bricks were displayed on the front porch, recreating the flower bed that was once there.

Reflections on Planting Acorns
I have many fond memories of growing up in the 50s and 60s in central Indiana, where my youth was like something out of a Norman Rockwell painting. But at Civic Park, I questioned my right as an old white guy who didn’t live there to impose my values on the youth in this community. But in the words of Mary Oliver, “May I be the tiniest nail in the house of the universe, tiny but useful.”

I also became aware that I, too, was planting acorns. And like the Chinese proverb, I will probably not see the fruits or enjoy the shade of the seeds I’ve sowed. A small concession for an art teacher arborist. 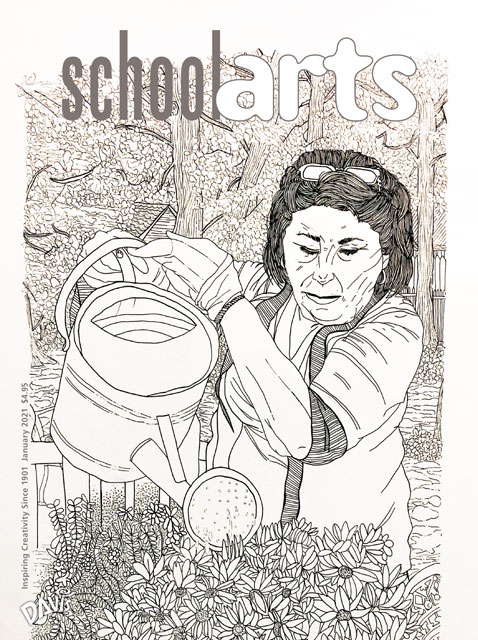