Just over a decade ago, I was a new art teacher who was very excited to bring animation into my elementary curriculum. I uploaded hundreds of images from digital cameras into stop-motion software on my laptop to help students create short animations of blurry moving characters. Fortunately, technology has advanced so students can create multiple types of animation using an iPad.

Whether you’re starting an animation unit or opening the animation center, start simple. This doesn’t mean teachers need to dictate what character students animate or the story they tell. Give students adequate time to observe, play, and fail while exploring animations. Animation is really about play and bringing characters and stories to life.

Animation started in the 1880s in the simple form of flipbooks, thaumatropes, and zoetropes, and these devices are still useful today for helping students understand movement by seeing the sequence of images. Students are usually shocked to discover fifteen to twenty-four frames per second are used for the animations they watch.

Types of Animation
There are two main types of animation that I introduce to elementary students: stop-motion and 2D. Stop-motion animation is created by taking still images of objects. If clay is used, it’s called claymation. If flat objects are used, it’s cut-out animation, and if 3D objects are used, it’s object animation. These can be created in an application such as Stop Motion Studio, which is intuitive and easy to use with in-app editing, including sound. It also has settings for “onion skinning,” a technique that shows the last frame as a transparent layer, making setup during the next class easier.

Two-dimensional animation is a modern version of cel animation, originating from the transparent celluloid film traditionally used for hand-drawn or painted animations. The concept of drawing on layers or cels can be recreated easily using a vector-based drawing application, such as Do Ink. Some of this application’s key features are the ability to duplicate or add layers, use onion skinning (called ghost frames), and to import photos or videos. This means that the rotoscoping technique, in which animators trace over a film frame by frame, can also be simulated. However, not all animation needs to be this complex. Props and characters can be drawn in a single frame and are later animated by simply dragging them along a path of movement.

Observe
Students are fascinated with the process of animation using traditional and digital technologies. Spend a class exploring flipbooks, thaumatropes, and zoetropes, or show students a variety of short animations. The Kids Should See This has a wonderful collection of student-appropriate animations. Find a behind-the-scenes setup of an animation studio or share your own setup.

Play
I believe it’s extremely important to build in time for play when introducing new media. The first time students create a stop-motion or cel animation, I have them simply move a character or an object of their choice. Imagine a simple flipbook or a GIF. The objective is not to have students tell a story, but to begin to understand the techniques, tools, and materials of animating. This is when students can fail and learn about why their animation might make the viewer feel like they are on a roller coaster. During play is a great time to encourage students to share and teach others and you.

Planning, Creating, and Editing
My goal for student animations is for students to communicate their own ideas. Sometimes these ideas come from another class. I introduce students to storyboarding, but I’ve found they are most successful when they use a simple three-stage story arc with sketches and brief descriptions. During conferencing, we might also discuss time and perspective and think of ways to communicate the plot that don’t involve showing all of the action, such as narration or subtitles.

Animations require many frames, which takes lots of time, whether students choose stop-motion or digital animation. Provide adequate materials as well as tutorials to help them use their time wisely. When students work in groups, I have them choose jobs such as camera person, director, animator, and editor. During the editing stage, sound effects, voiceovers, music, subtitles, title, and credits are added.

Innovate
Multimedia is being used artistically in ways that were never possible before. Augmented reality (AR) apps can be used to bring animations into the real world. A trigger image (e.g., a poster) is chosen, which then prompts the animation to begin playing. Green screen apps also merge reality and animation by letting students be in their own animations. Animation is a playful way for students to innovate. 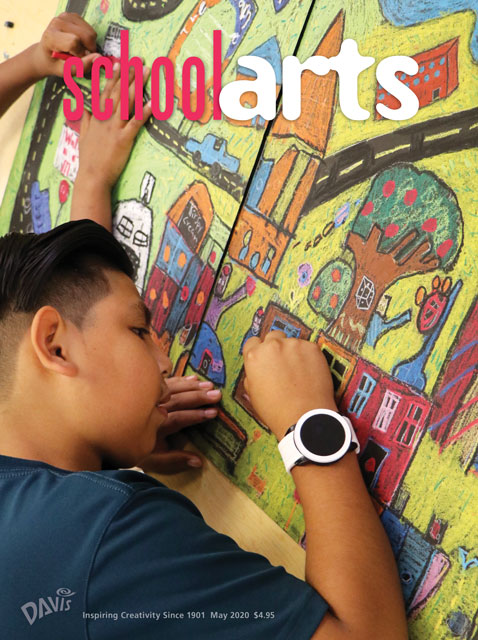 Art teachers motivate students to explore the powers of the digital age in a variety of lessons that focus on movement, film, animation, and illusion. Students use animation apps to create original characters and short videos, design and construct brightly lit “moving pictures” from spinning image panels, assemble sculptures that suggest movement and harmony, and more.