Walking in the Steps of Ancient Artists

Yesterday my husband and I went to Albuquerque to preview some new sites we will be visiting with our SchoolArts/CRIZMAC Tres Culturas: Exploring the Artistic Spirit of Santa Fe and Taos group next summer (July17-23).

Our first stop was the Petroglyph National Monument. We had not been there in some time and it was much changed from our memories. There is a beautiful visitor center, friendly volunteer rangers, and accessible paths. 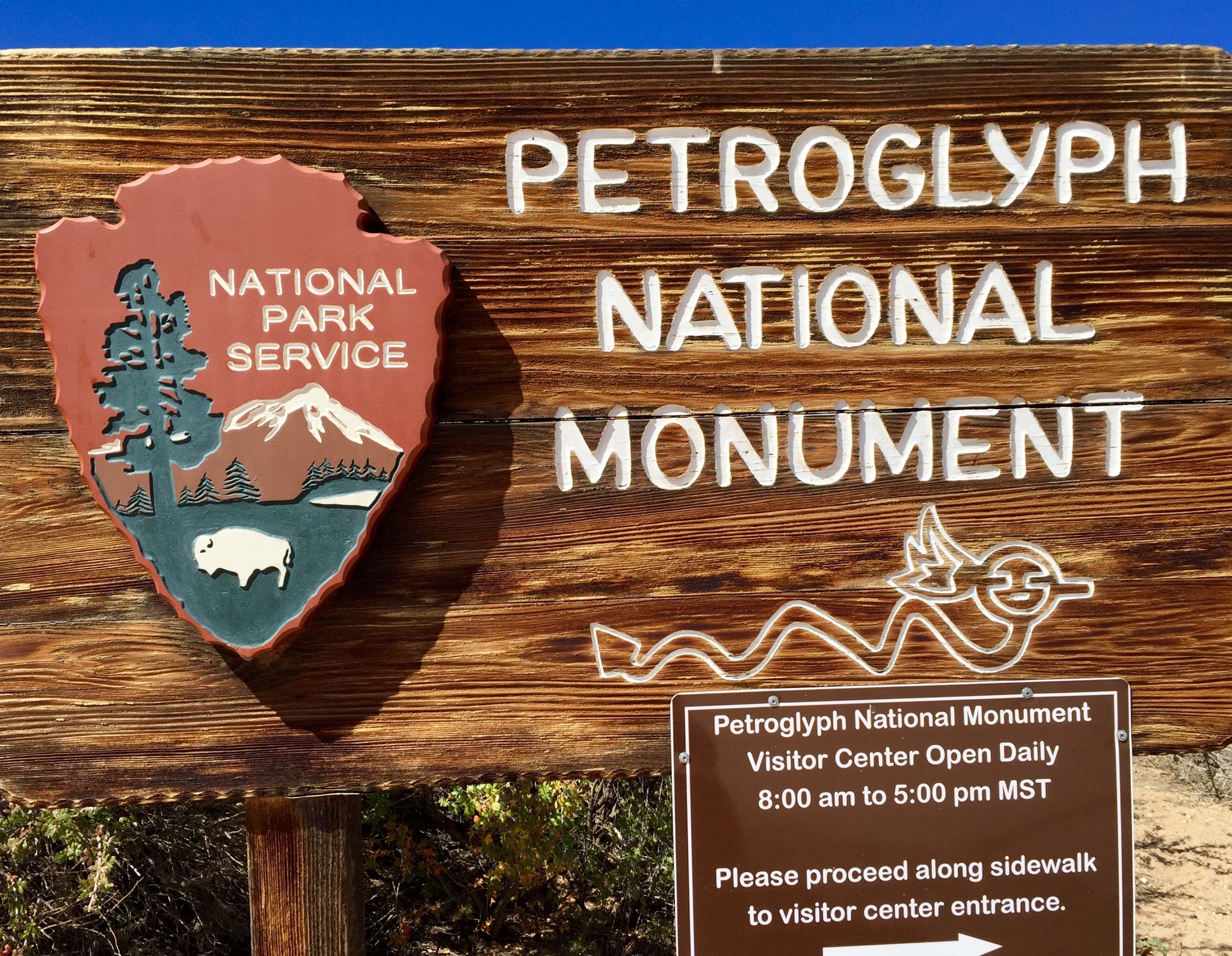 What I was happy to see were the interpretive materials that were up to date. The above sign reads:

Identification of some petroglyphs is based on interpretations by today's Pueblo people. We cannot say for certain what all the images represent, nor is it appropriate for modern Pueblos to reveal the meaning of an image to others. Various Pueblos have differing opinions on meanings and any single image may have complex or multiple meanings based on its context.

Most petroglyph images in the park are dated by relative dating techniques. The design elements are compared to dated pottery and prehistoric Puebloan murals. The murals had colorful painted images on the plaster walls of kivas (subterranean ceremonial rooms). Many of the mural images are not found before 1300, which suggests that new ideas were beginning to emerge in Pueblo culture. 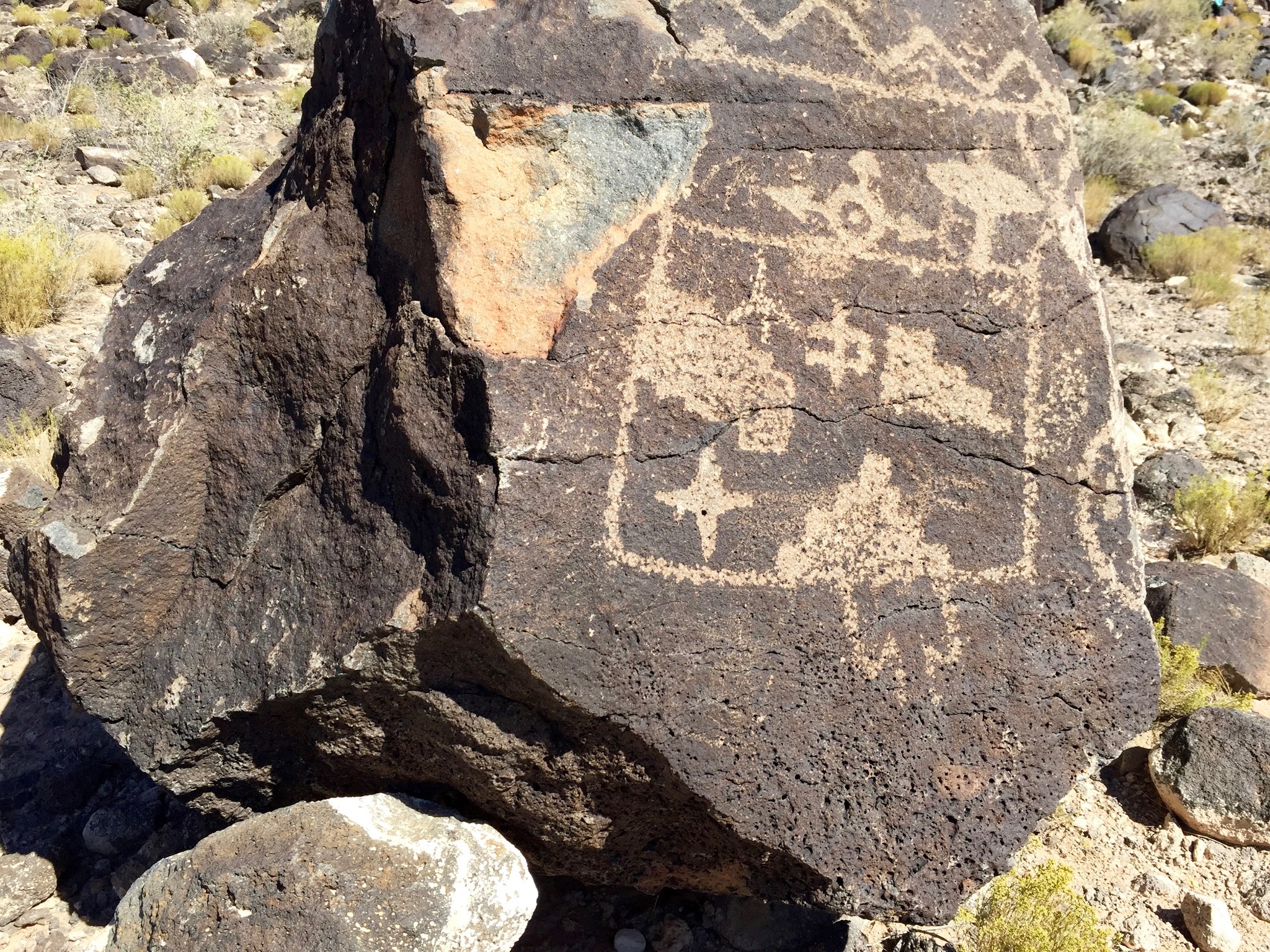 Many of the petroglyphs you see here are located near the bases of the trails, so they are fairly accessible. What is sad is that some of the rocks clearly have had petroglyphs chipped away. I would guess that trying to remove them would also destroy them in the process. 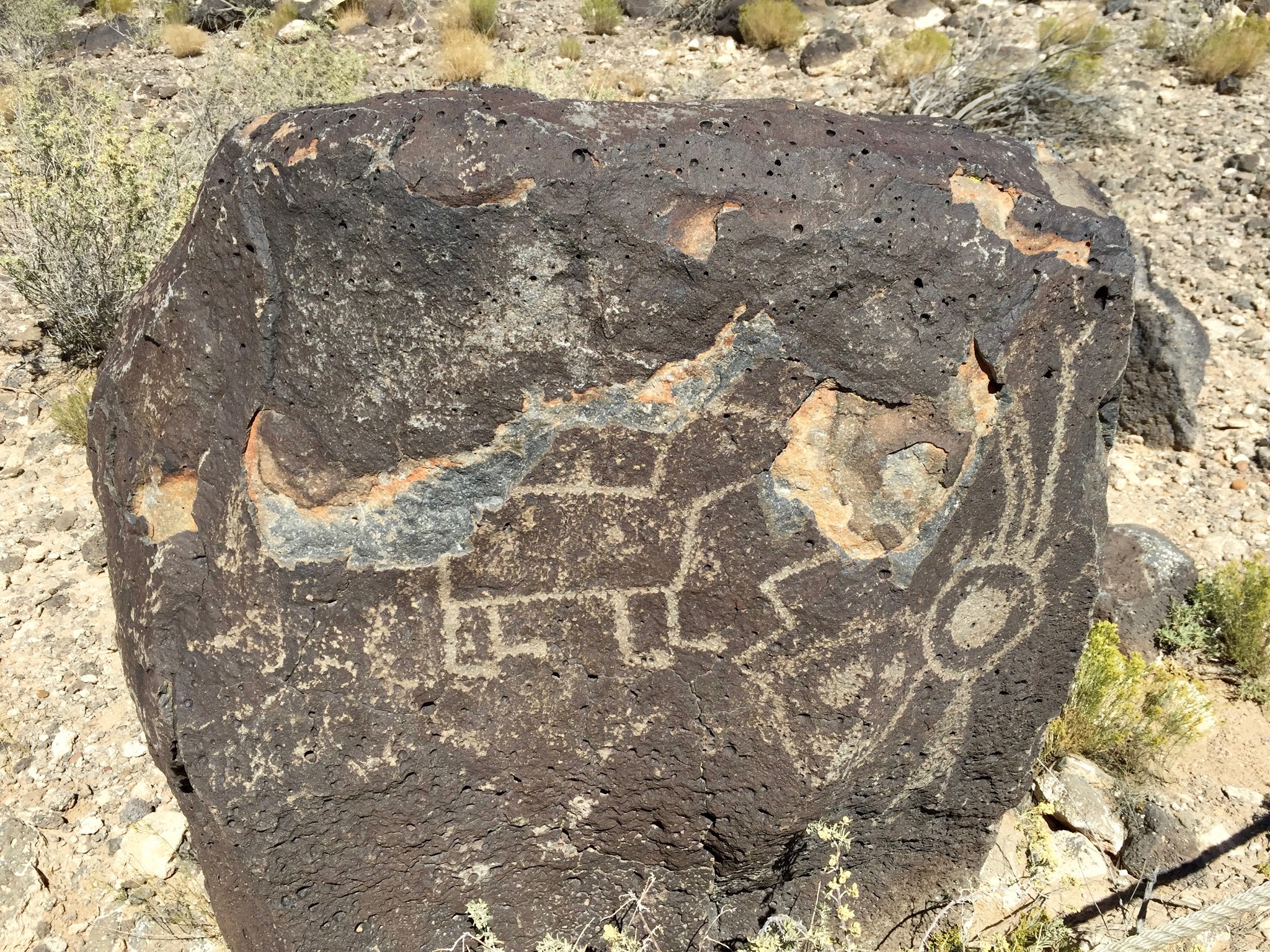 The rock here is black and volcanic, with lighter layers underneath. They may look simple but they were carved painstakingly with stone tools. And they have lasted since the 1300s. 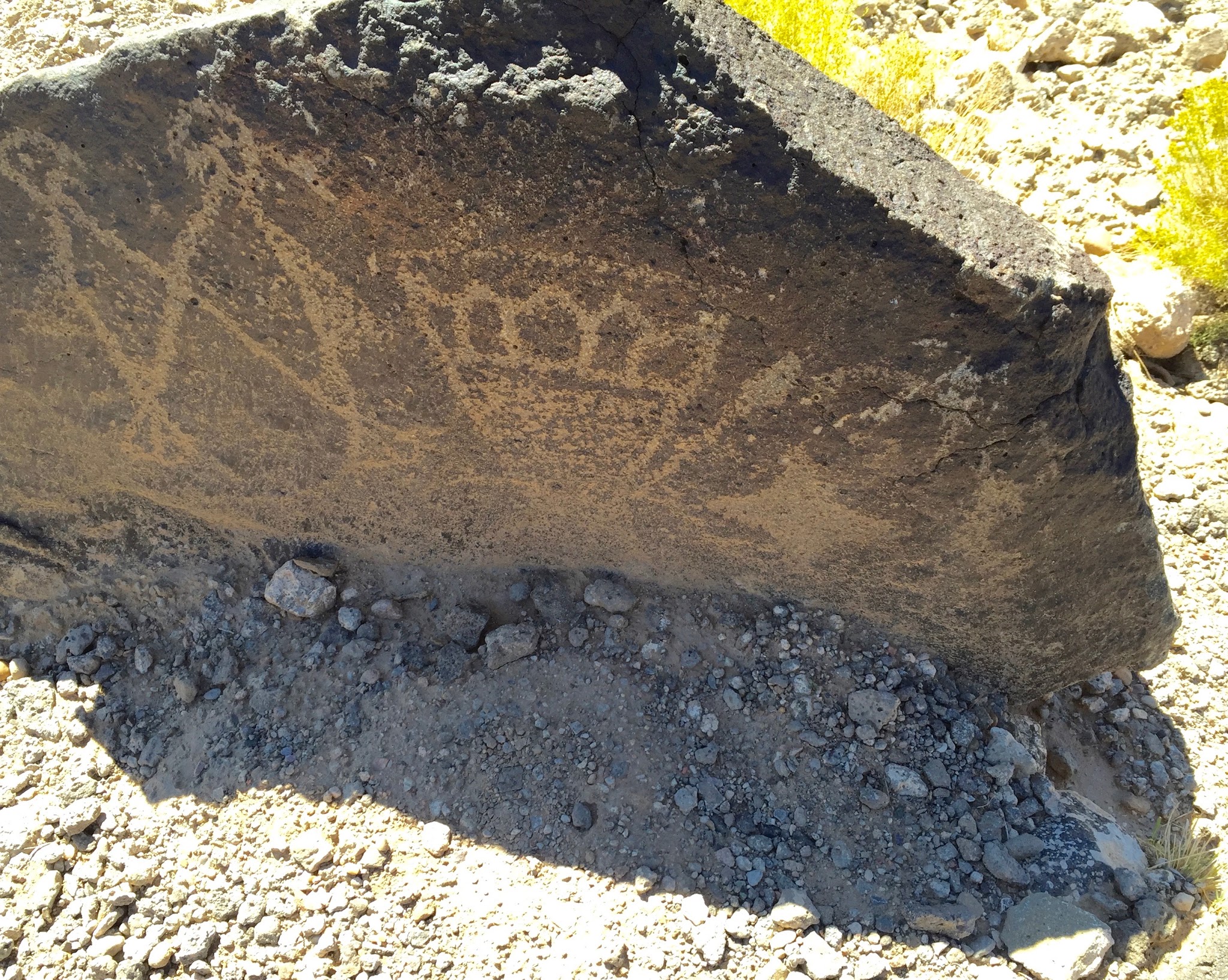 Though we may refer to the people who made these as artists, it is unlikely they would have been considered that way in their own time. Most Native Peoples do not consider art as separate concept from life or have a word for "art." 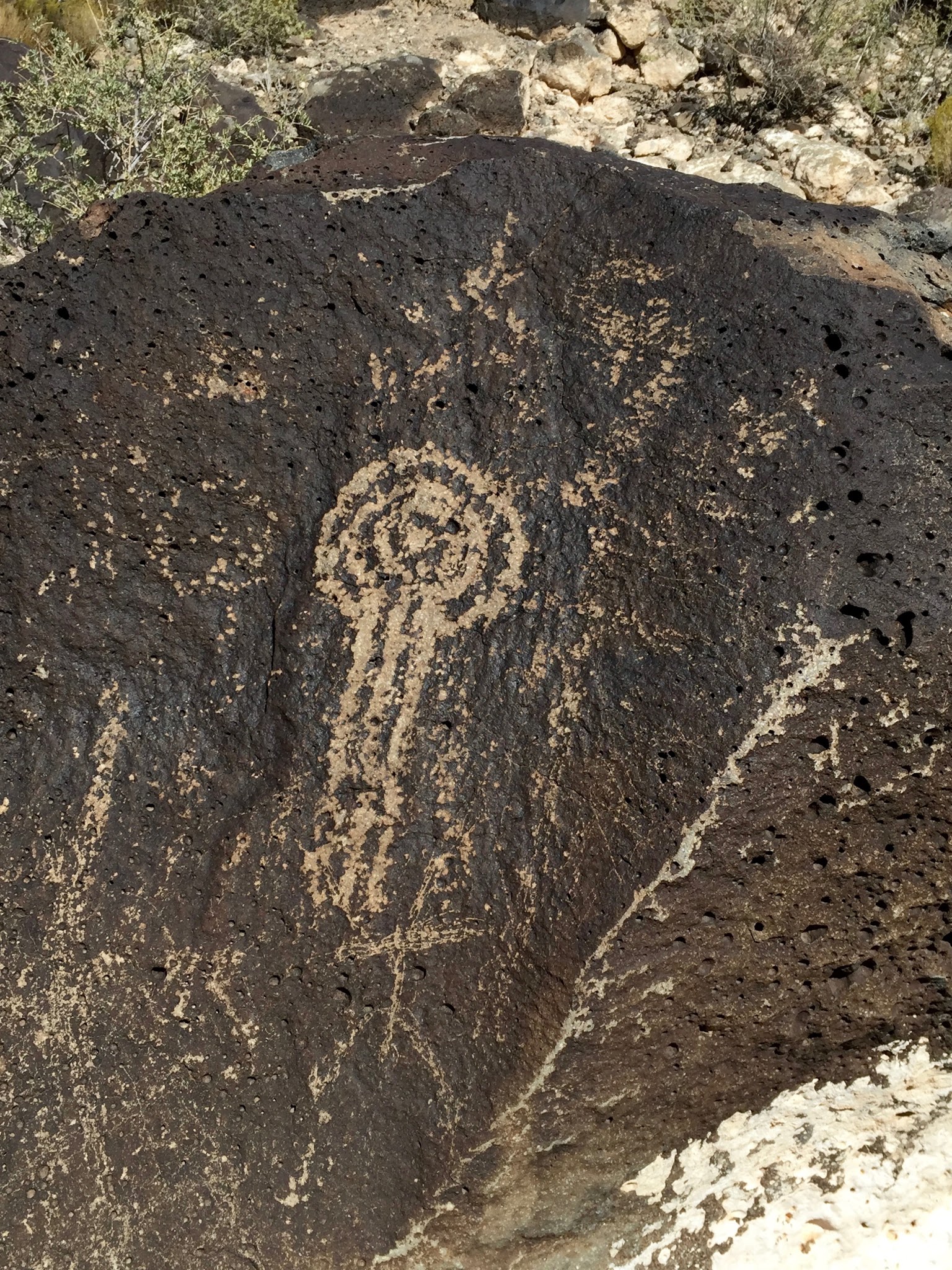 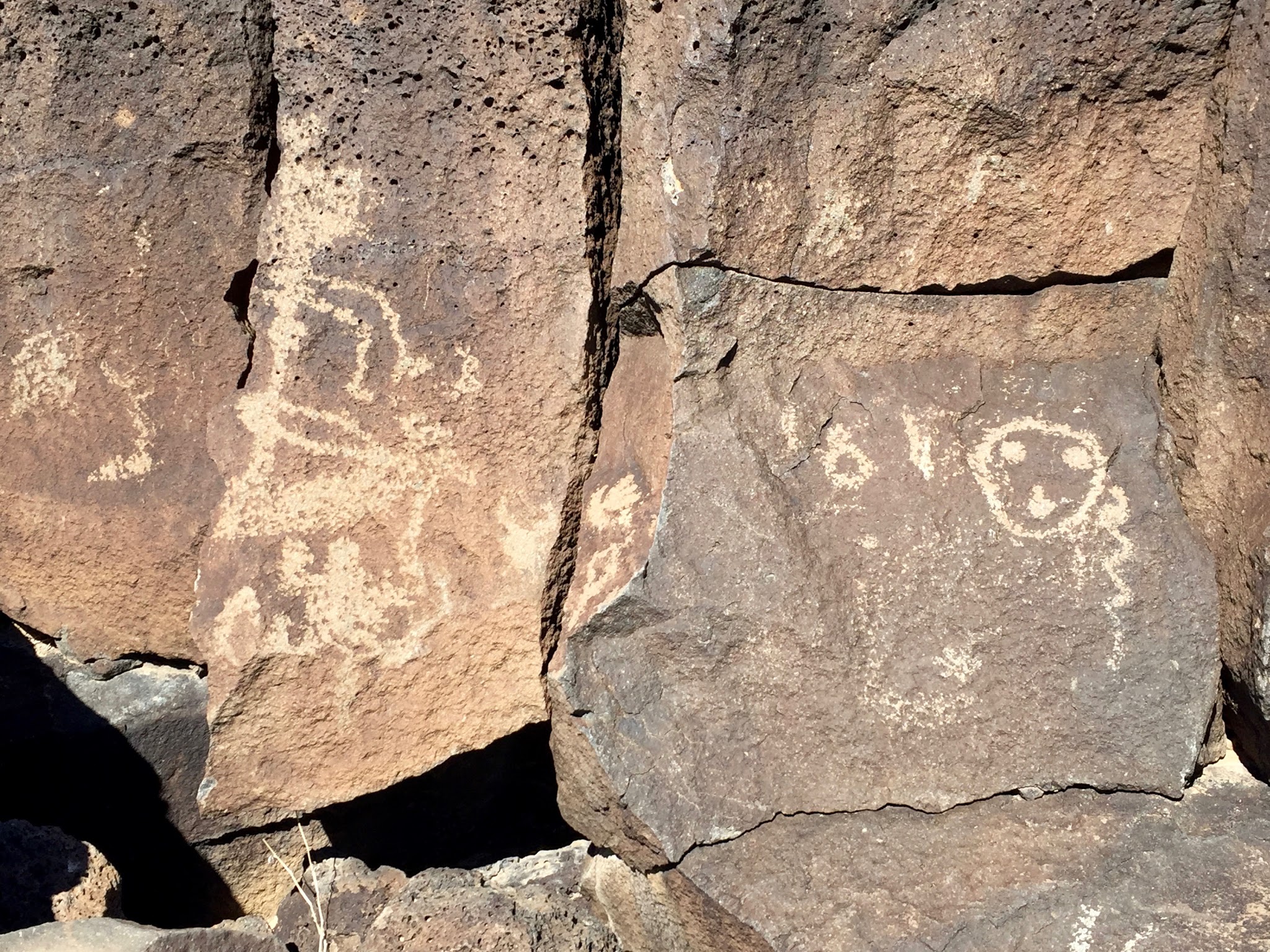 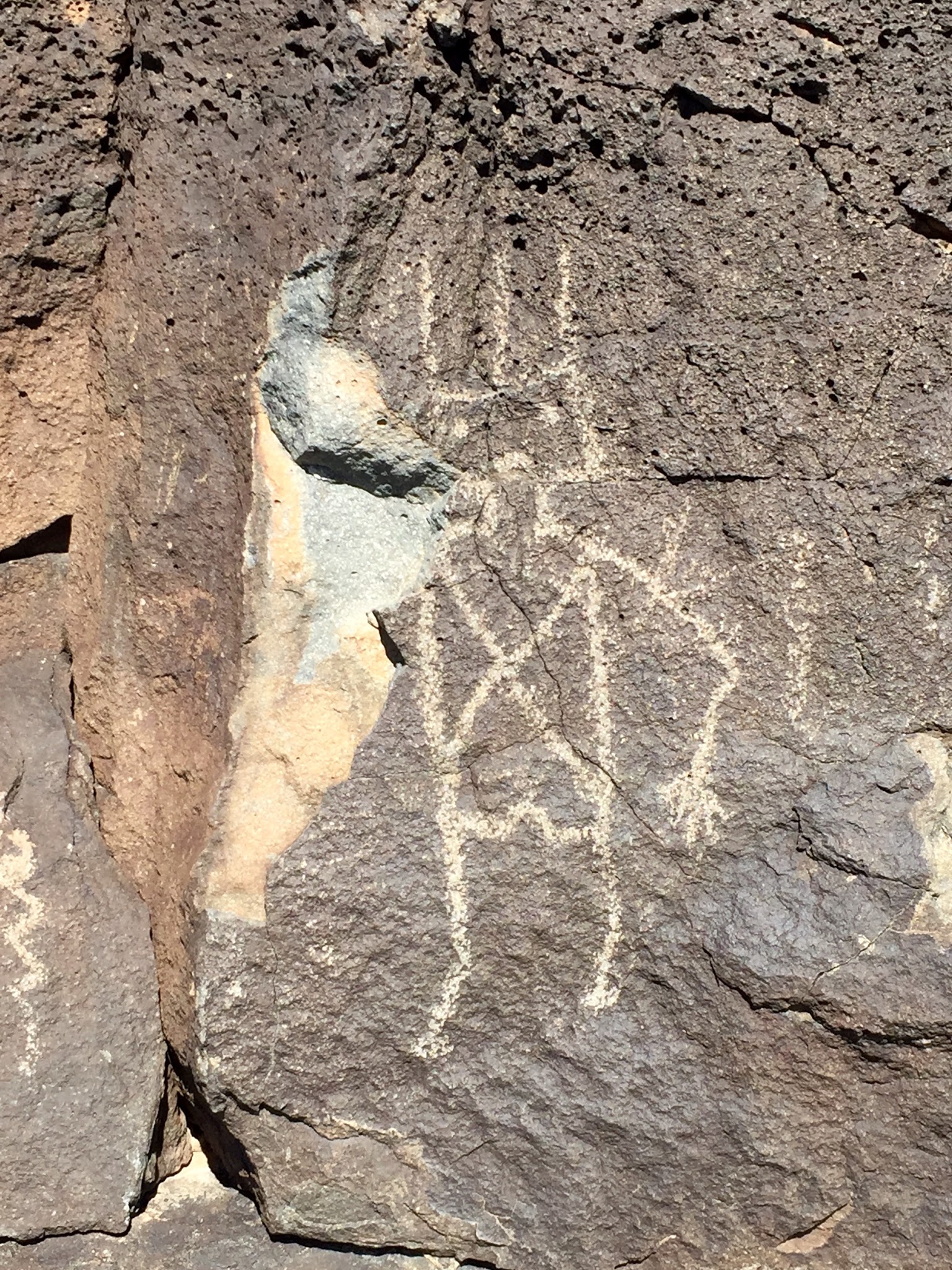 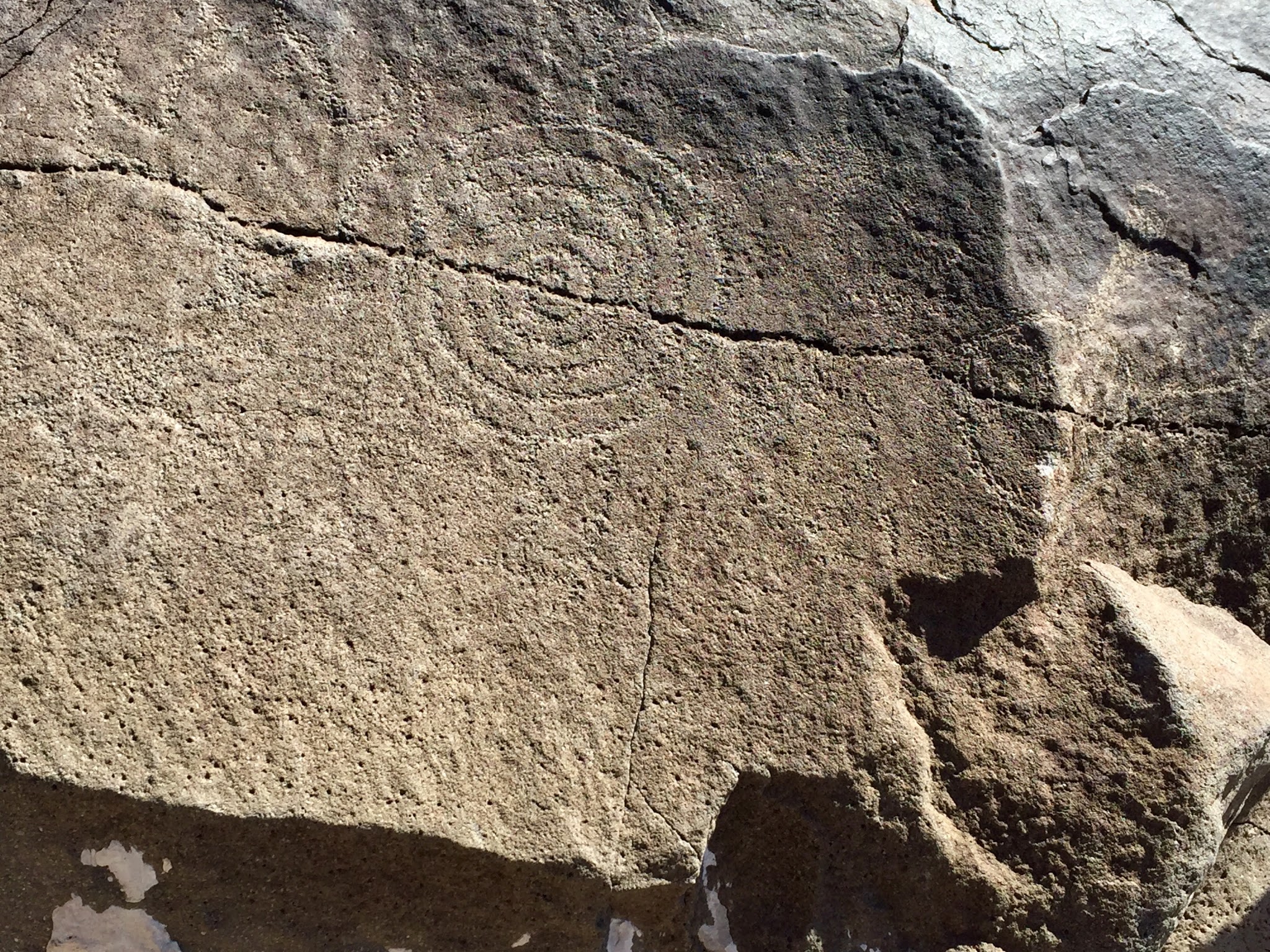 We can speculate on the meaning of symbols but we can also look at prehistoric symbols and images from around the world and across time and compare their commonalities. Spirals are one of the most common. 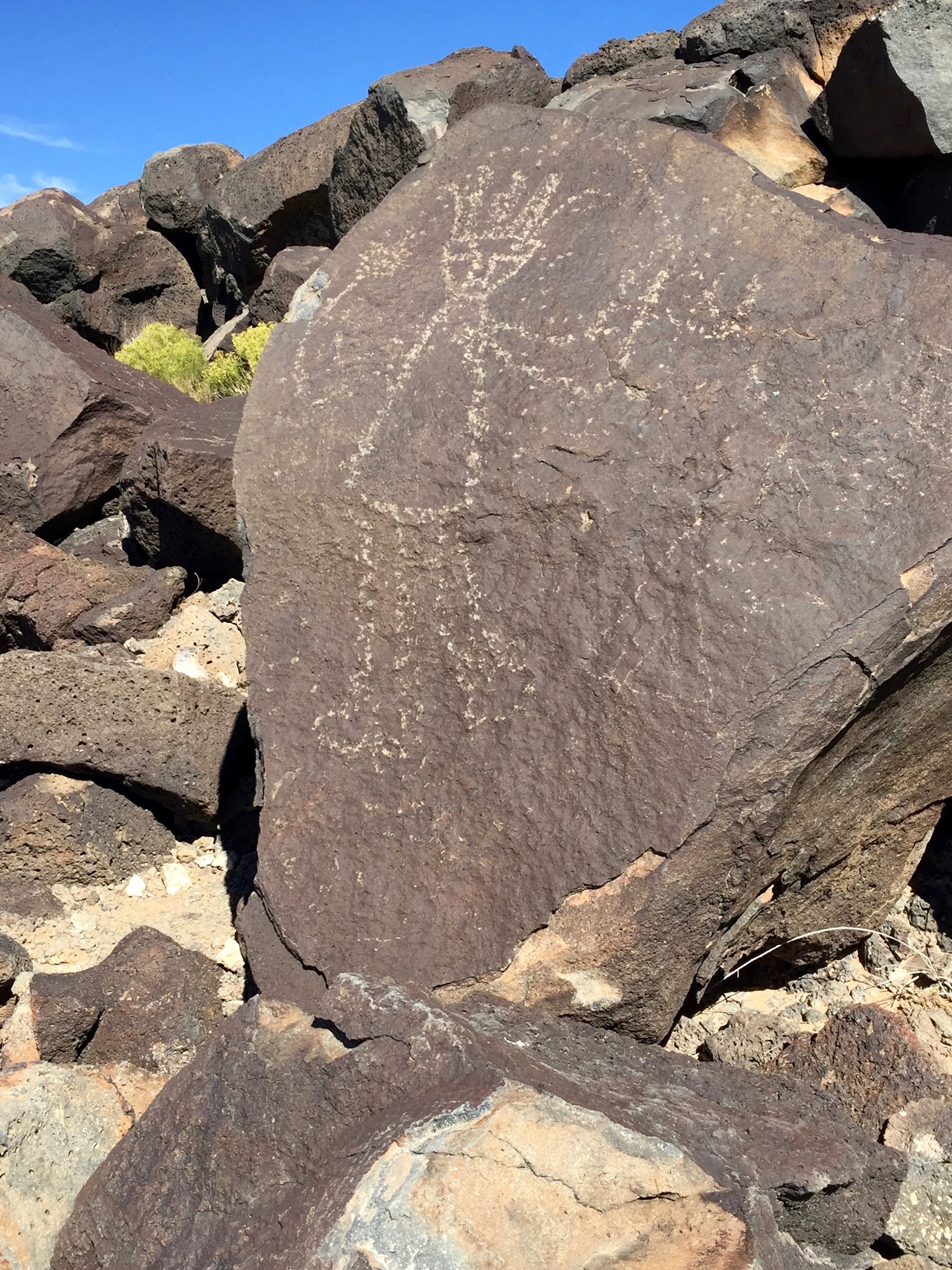 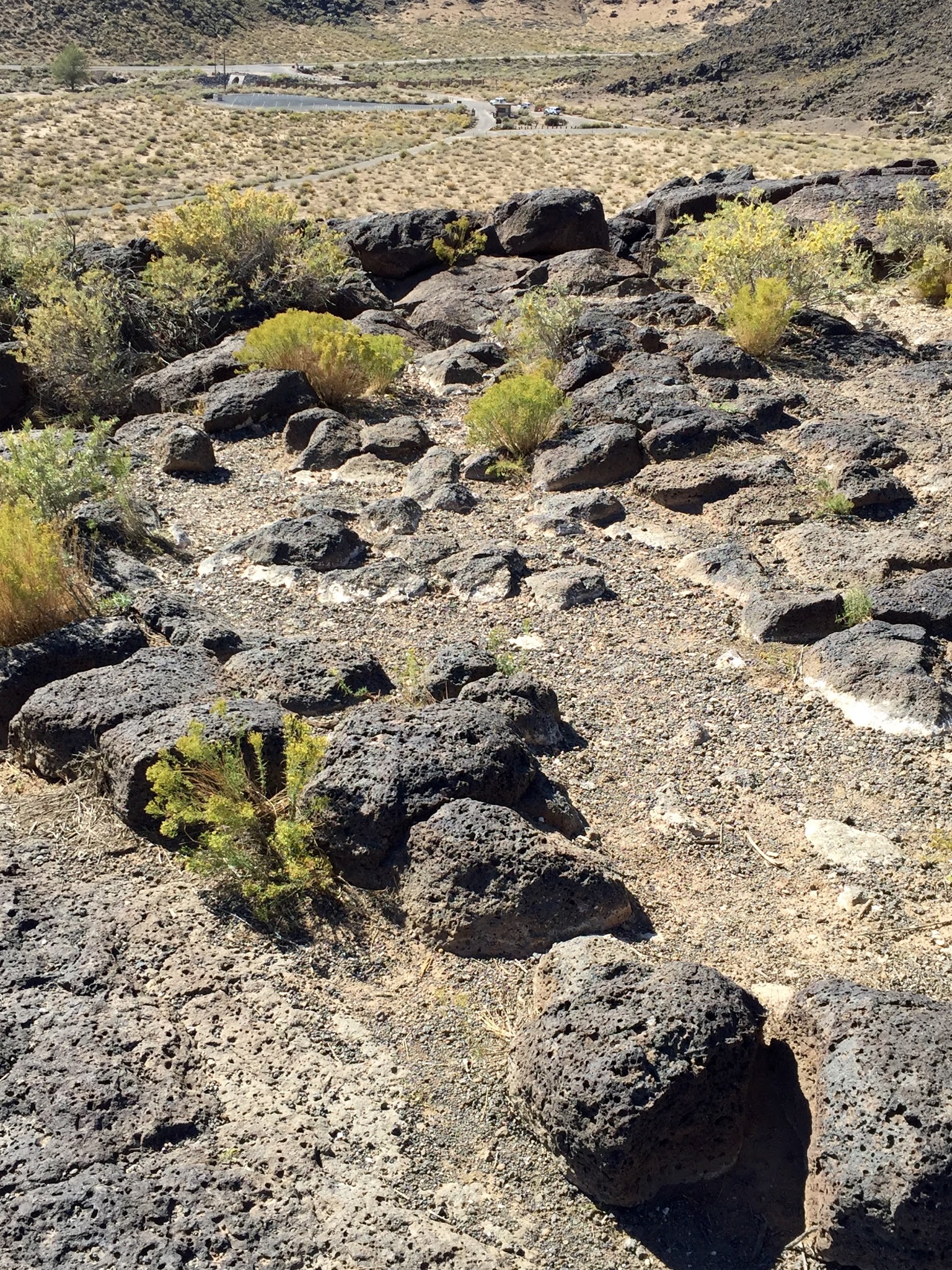 Looking down from the highest point towards the highway. There is a line of houses just to left of this view. 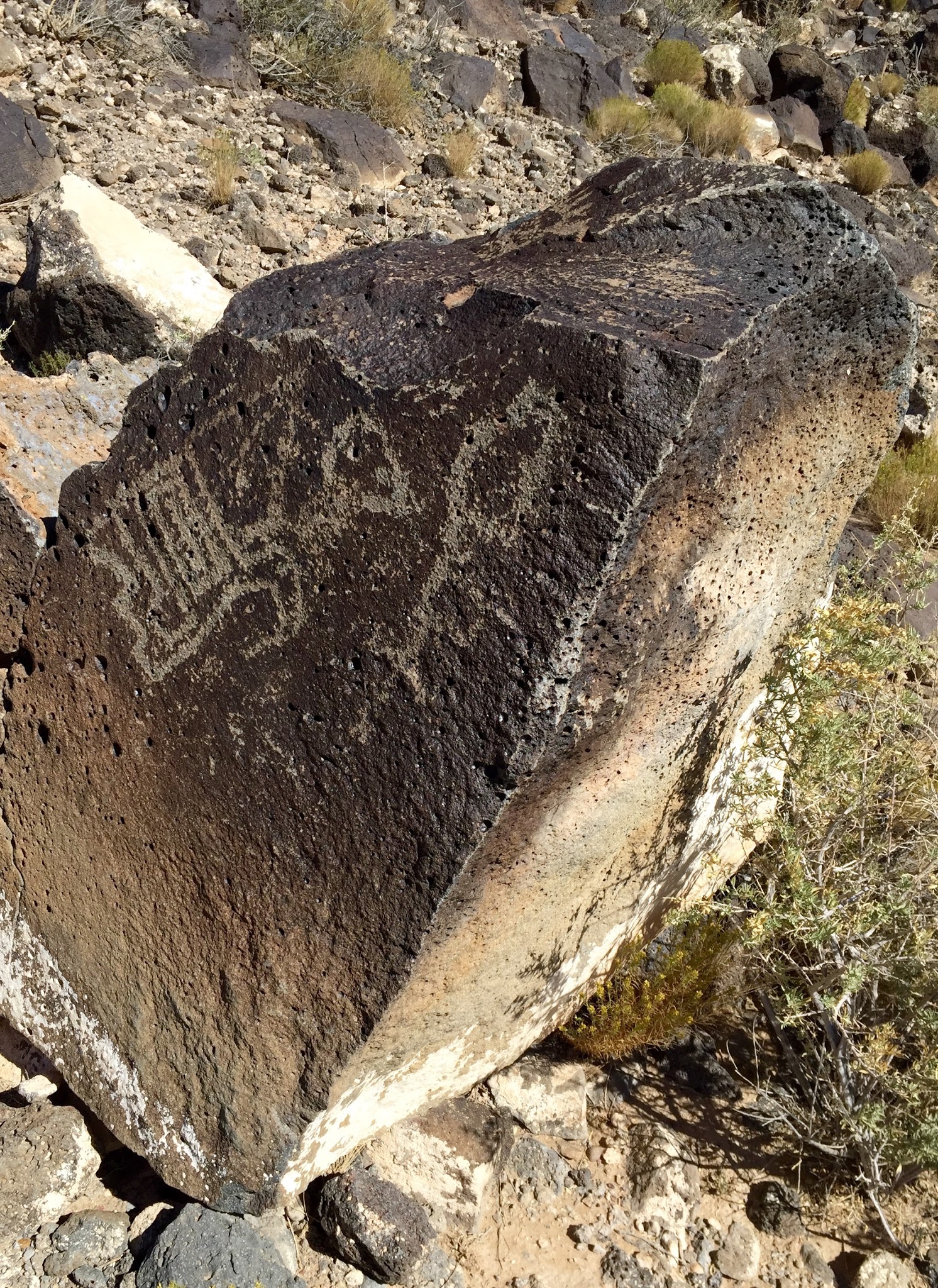 As a longtime art teacher, I tend to view the world in terms of what I would want to share with students. How would I use this experience and petroglyph images with students? Rather than have students simply copy such petroglyphs in clay, why not have them create images, perhaps digitally, that relate to contemporary life and that still might have meaning over 700 years from now?
You could also focus on the issues of respect and preservation and why that is needed. If you have taught about petroglyphs in your art room, please share your lessons, ideas, and thoughts.