In the Western world, aesthetics is considered to be the branch of philosophy that is concerned with concepts of value and beauty as they relate to the arts. 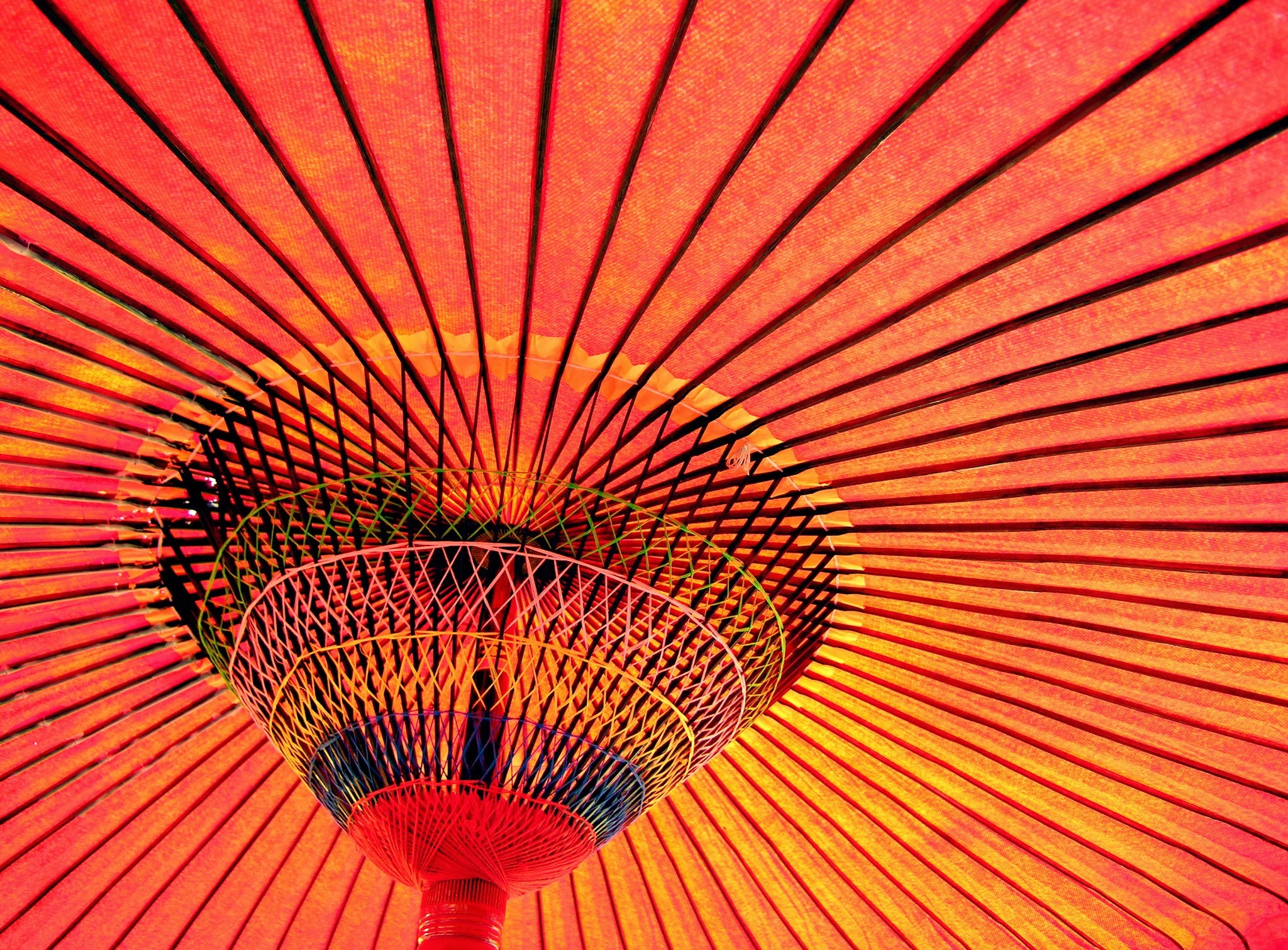 At a Japanese shrine.
Aesthetics
Philosophers from Plato until the present time have had fairly rigid ideas about what artists should create and what people should like, but in today’s world, aestheticians represent a variety of approaches to the philosophy of art.
Aesthetics, in the broadest sense, may be thought of as a worldview, a view that may be markedly different in other cultures. Objects from other cultures that are categorized as art works from the Western perspective may or may not hold the same meaning in their culture of origin. Precisely because of possible differences in worldviews and aesthetic stances of non-Western cultures, it is important to set aside Western aesthetics as criteria when making judgments about non-Western art. For example, many non-Western cultures recognize no distinction between fine art and craft, may not even have a word for “art,” and may not separate art from everyday life.
Japanese Aesthetics
To understand the art and aesthetics of Japan, it is necessary to investigate a Japanese worldview, ideas about the nature of art, and influences brought about through contact with other cultures. The aesthetics of Japan developed in a unique fashion, partly because of its geographic location, a string of islands about 100 miles from Korea and 500 miles from China. Its isolation by the sea helped protect Japan from foreign invasion and allowed its rulers to control contact with other nations.
During long periods of self-imposed isolation, art forms and aesthetic ideas developed which were specifically Japanese. Over the centuries, when interactions with foreign cultures occurred, they influenced the traditional arts and aesthetics of Japan. For the purposes of this discussion, the focus will be on what remained essentially Japanese.
Traditional Japanese art and aesthetics were most affected by the Chinese and by Buddhism, but influences from the West are also evident. For example, the Japanese made no distinction between fine arts and crafts prior to the introduction of such ideas by Europeans in the 1 870s. The Japanese word that best approximates the meaning of “art” is katachi. Katachi translates to mean “form and design,” implying that art is synonymous with living, functional purpose, and spiritual simplicity.

The primary aesthetic concept at the heart of traditional Japanese culture is the value of harmony in all things. The Japanese worldview is nature-based and concerned with the beauty of studied simplicity and harmony with nature. These ideas are still expressed in every aspect of daily life, despite the many changes brought about by the westernization of Japanese culture. This Japanese aesthetic of the beauty of simplicity and harmony is called wabi-sabi (wah-bee sah-bee). 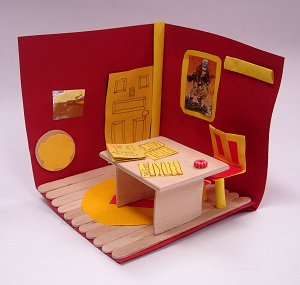 The stone basin is an example of Wabi-Sabi
Wabi-Sabi
Since wabi-sabi represents a comprehensive Japanese worldview or aesthetic system, it is difficult to explain precisely in western terms. According to Leonard Koren, wabi-sabi is the most conspicuous and characteristic feature of what we think of as traditional Japanese beauty, and it “occupies roughly the same position in the Japanese pantheon of aesthetic values as do the Greek ideals of beauty and perfection in the West.” Wabi-sabi is a beauty of things imperfect, impermanent, and incomplete. It is the beauty of things modest and humble. It is the beauty of things unconventional. 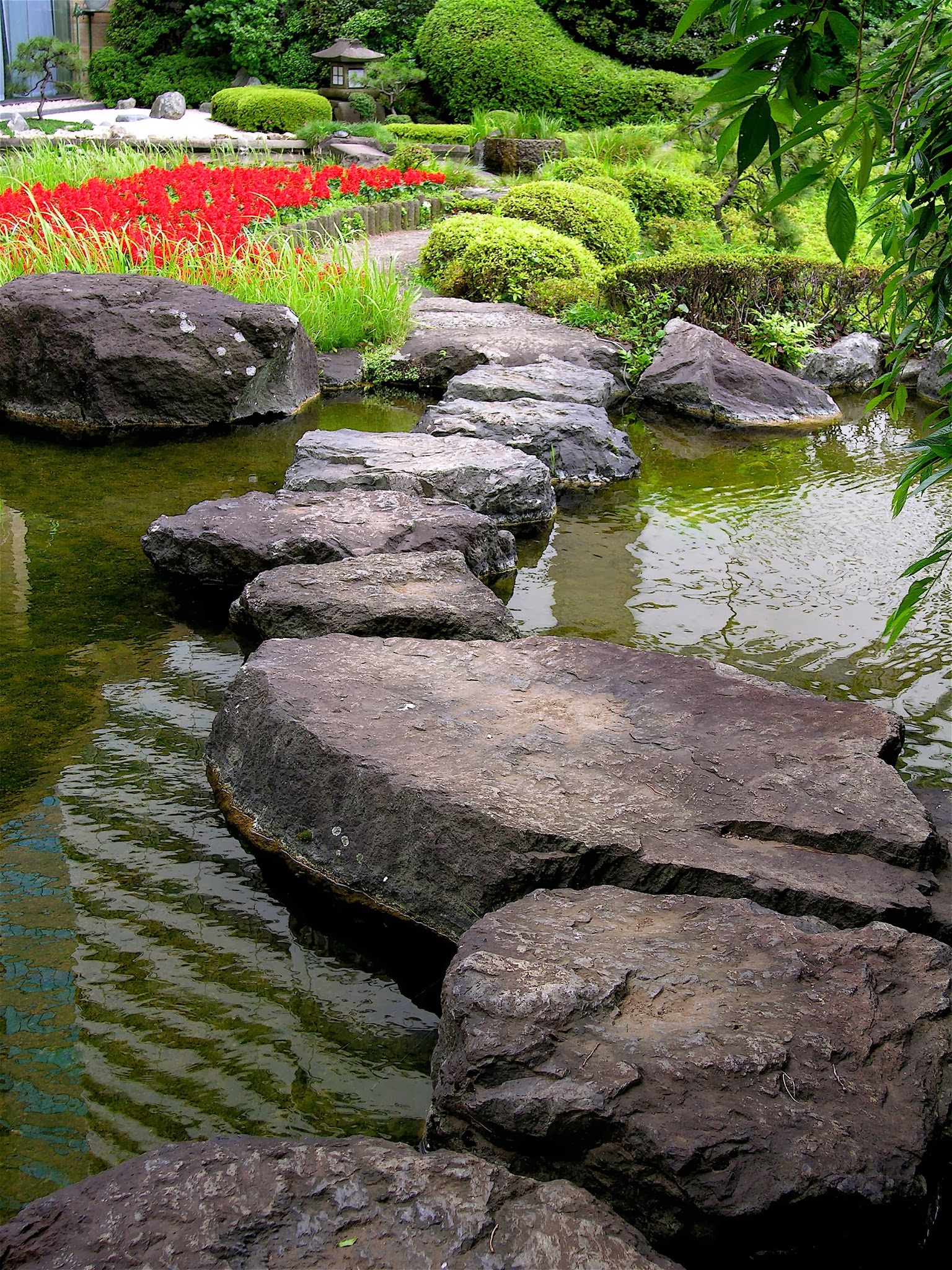 In a Japanese garden.
The concepts of wabi-sabi correlate with the concepts of Zen Buddhism, as the first Japanese involved with wabi-sabi were tea masters, priests, and monks who practiced Zen. Zen Buddhism originated in India, traveled to China in the 6th century, and was first introduced in Japan around the 12th century. Zen emphasizes “direct, intuitive insight into transcendental truth beyond all intellectual conception.” 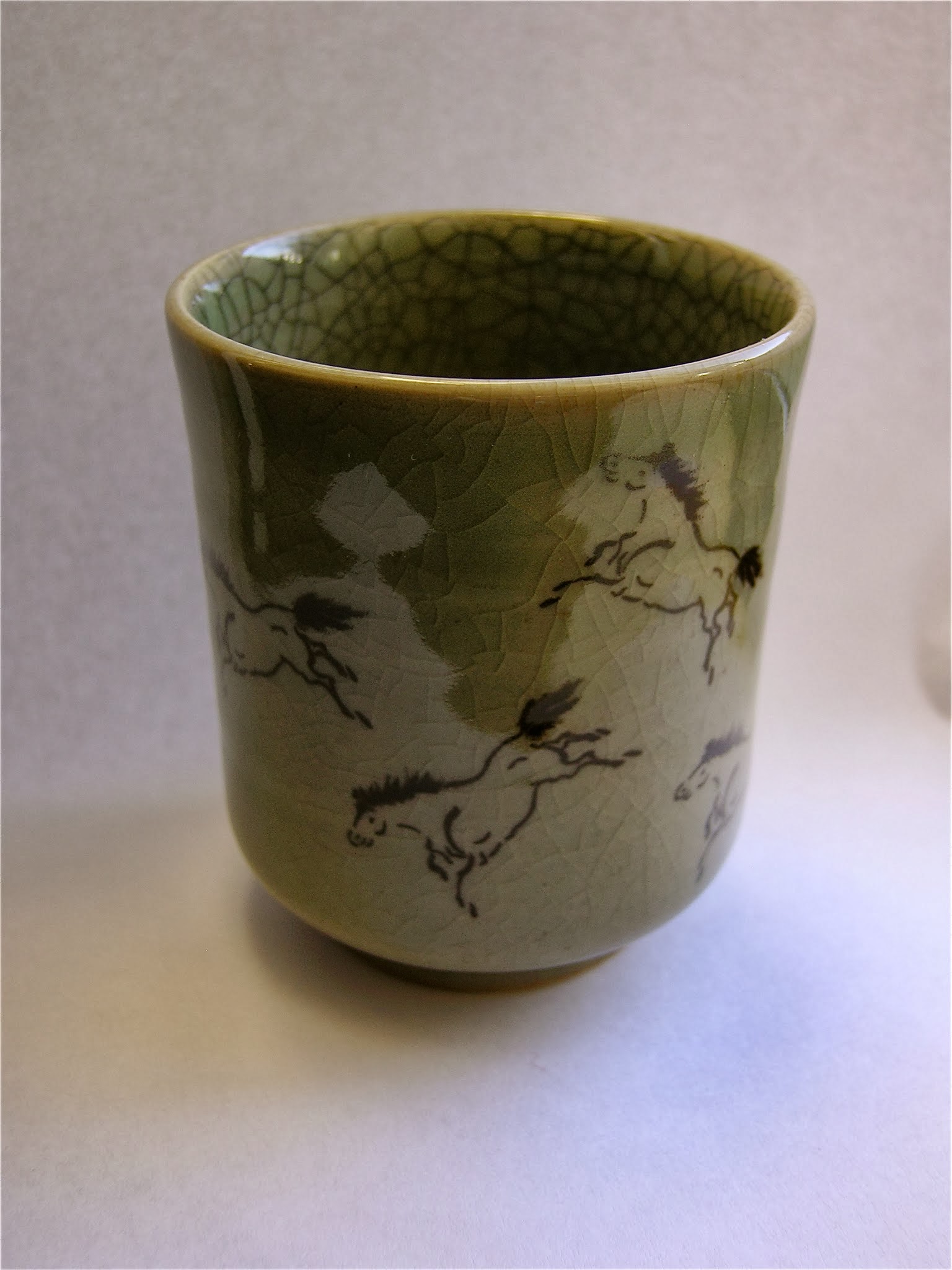 A tea bowl.
The Japanese Tea Ceremony
“Tea began as a medicine and grew into a beverage.” --Katkuzo Okakura
“The Way of Tea cannot be taught in any book...It is a state of mind. Tea is a living tradition.” --Professor Kimiko Gunji, University of Illinois at Urbana-Champaign

“Holding a bowl of tea whisked to a fine froth...
Such a simple thing: yet filled with a spirit that
Reaches back more than a thousand years.”  The Urasenke Tradition of Tea

The most comprehensive example of the Japanese aesthetic of wabi-sabi is found within the traditions of the tea ceremony. To understand Japanese aesthetics, it is necessary to understand the unique features of the Japanese tea ceremony, known as chanoyu, chado, or sado. The tea ceremony is the serving of tea, ritualized over time and rooted in Zen Buddhism. It symbolizes aesthetic simplicity and represents the fundamental Zen principles of harmony, respect, purity, and tranquility. The word chanoyu (chah-no-yoo) literally means “hot water for tea,” but its simple art is a synthesis of many Japanese arts, which focus on preparing and serving a bowl of tea.
According to Leonard Koren, the tea ceremony “became an eclectic social art form combining, among other things, the skills of architecture, interior and garden design, flower arranging, painting, food preparation, and performance.”
The tea ceremony developed under the influence of Zen Buddhism, the aim of which is, in simple terms, to purify the soul by becoming one with nature. The true spirit of the tea ceremony has been described by words like calm, rustic, graceful, austere, and simple. The tea ceremony varies according to the seasons, with tea bowls, types of tea, flowers, and scrolls appropriately chosen. 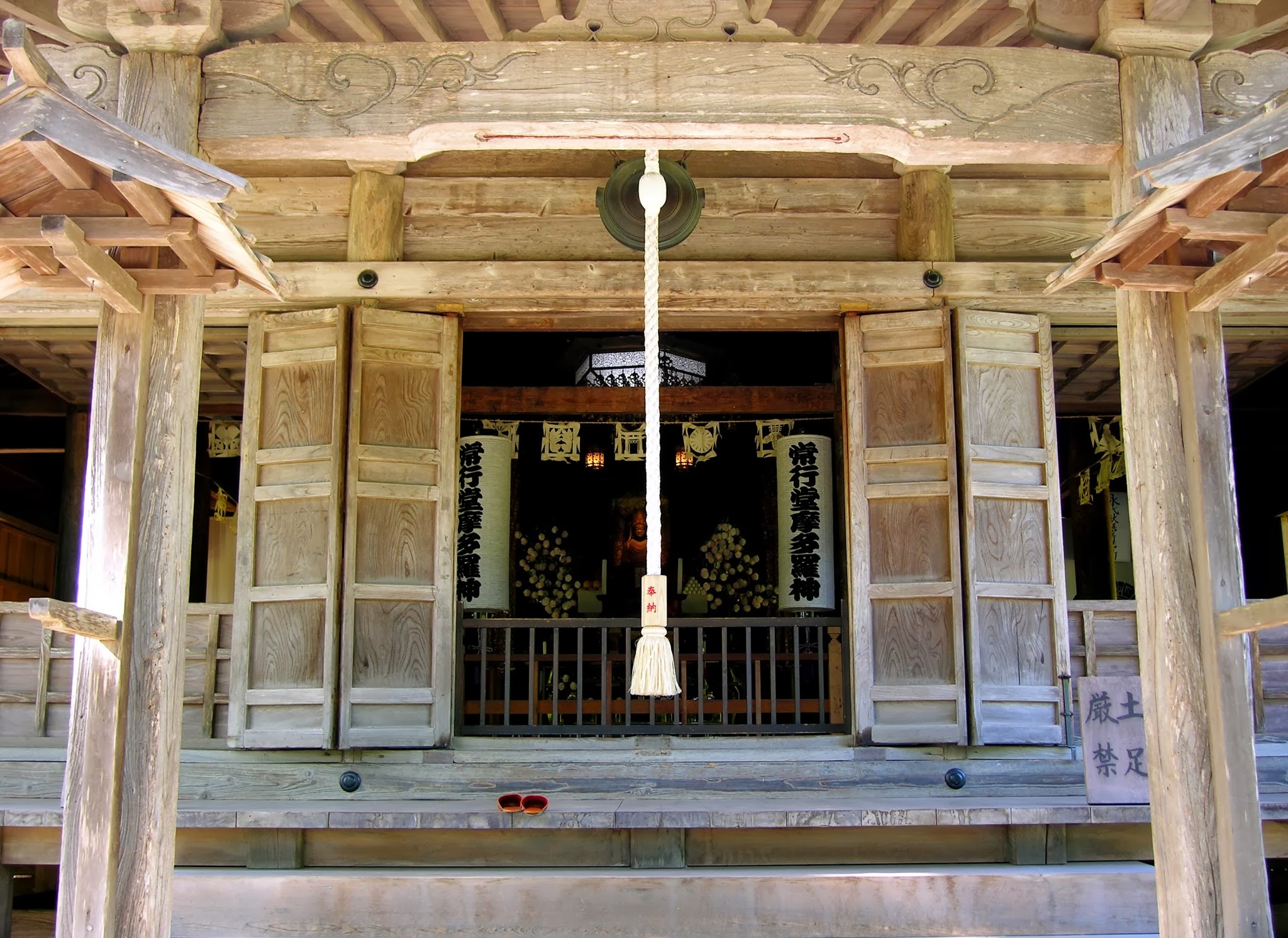 A Japanese temple.
The History of the Tea Ceremony
The tea plant probably originated in the mountainous regions of southern Asia and was later brought to China. Tea was first introduced to Japan along with Buddhism from China in the 6th century, but the Emperor Shomu, who ruled from 724-749, is credited with introducing tea drinking into the country after he had been presented bricks of pressed tea leaves by a Chinese priest. During the Heian period (794-1185), tea was made from steamed and dried tea leaves ground into a powder. This green tea powder, called matcha (mah-chah), is still used today.
In the 15th century, Juro Murata, tea master to Shogun Yoshimasa Ashikaga, integrated many of the concepts of wabi-sabi into the prescribed practices of the tea ceremony, including the dedication of a special room or house for the sole use in the chanoyu. The samurai class, familiar with the austerity of Zen Buddhism and the disciplined and proscribed lifestyle of the warrior, embraced the ceremony of tea. As rules governed every other aspect of life at the time, participants in tea ceremonies were also required to follow certain rules and procedures.
An increased emphasis on Zen Buddhist concepts in the tea ceremony was established by Sen no Rikyu (1522-1591), the most revered Japanese tea master. During the Momoyama period in the second half of the 16th century, Rikyu established a tea ceremony that reflects a simple and quiet taste, the form that is practiced and taught in Japan and throughout the world today. He also designed a simple, separate building to house the ceremony based on a typical Japanese farmer’s rustic hut. Rikyu further formalized the tea ceremony’s rules of behavior and identified the spirit of chanoyu with four basic Buddhist principles of harmony, respect, purity, and tranquility. These guiding principles signify the highest ideals of the tea ceremony.
The Seven Rules of Rikyu

“Make a delicious bowl of tea, lay the charcoal so that it heats the water; arrange the flowers as they are in the field; in summer suggest coolness; in winter, warmth; do everything ahead of time; prepare for rain; and give those with whom you find yourself every consideration.” --Soshitsu Sen

Many stories are told about Rikyu. Rikyu became the tea master for the warlord Hideyoshi Toyotomi, a difficult and powerful man. Hideyoshi heard of the wonders of Rikyu’s garden of morning glories and expressed a desire to see the flowers. As a result, Rikyu invited the warlord to tea. When Hideyoshi arrived and walked down the path to the teahouse, not a flower was in sight. Upon entering the teahouse, Hideyoshi saw a single, beautiful morning glory displayed on the alcove. Rikyu had cut down all the other morning glories so that full attention could be focused on one single blossom.
The power of Japanese warlords is evident in another story about Rikyu. In 1591, Hideyoshi demanded that Rikyu hand over his daughter to be a concubine to the warlord, but Rikyu refused. In retaliation, Hideyoshi ordered Rikyu’s ritual suicide. Rikyu held a last tea ceremony at the age of 70 and committed seppuku (ritual suicide) when the ceremony was completed.
Rikyu introduced much of the prescribed behavior used in contemporary tea ceremonies. Some of his contributions include a teahouse that can accommodate five people, a separate small room where tea utensils are washed, and two entrances, one for the host and one for the guests. The entrance for guests had a doorway low enough to require the guests to bend down to enter, humbling them in preparation for the tea ceremony.
In the traditional chanoyu, every part of the ceremony is carefully orchestrated. There are rituals for entering and leaving the room, making and serving the tea, and appreciating the choices of flower, scroll, and tea vessel appropriate to the season. The simplicity and austerity of the teahouse (and of Japanese homes) allows a exceptional focus and appreciation of a single flower or scroll carefully chosen to represent the season.
Aesthetic objects are not left on permanent display in Japanese homes, but are brought out for focused viewing and appreciation for specific purposes or seasons. As the season or purpose for display changes, the objects are stored and replaced by others more appropriate. Though Japanese rooms sometimes may appear too bare or simple for Western tastes, a Japanese visiting an a typical American home may feel surrounded and overwhelmed by visual clutter. 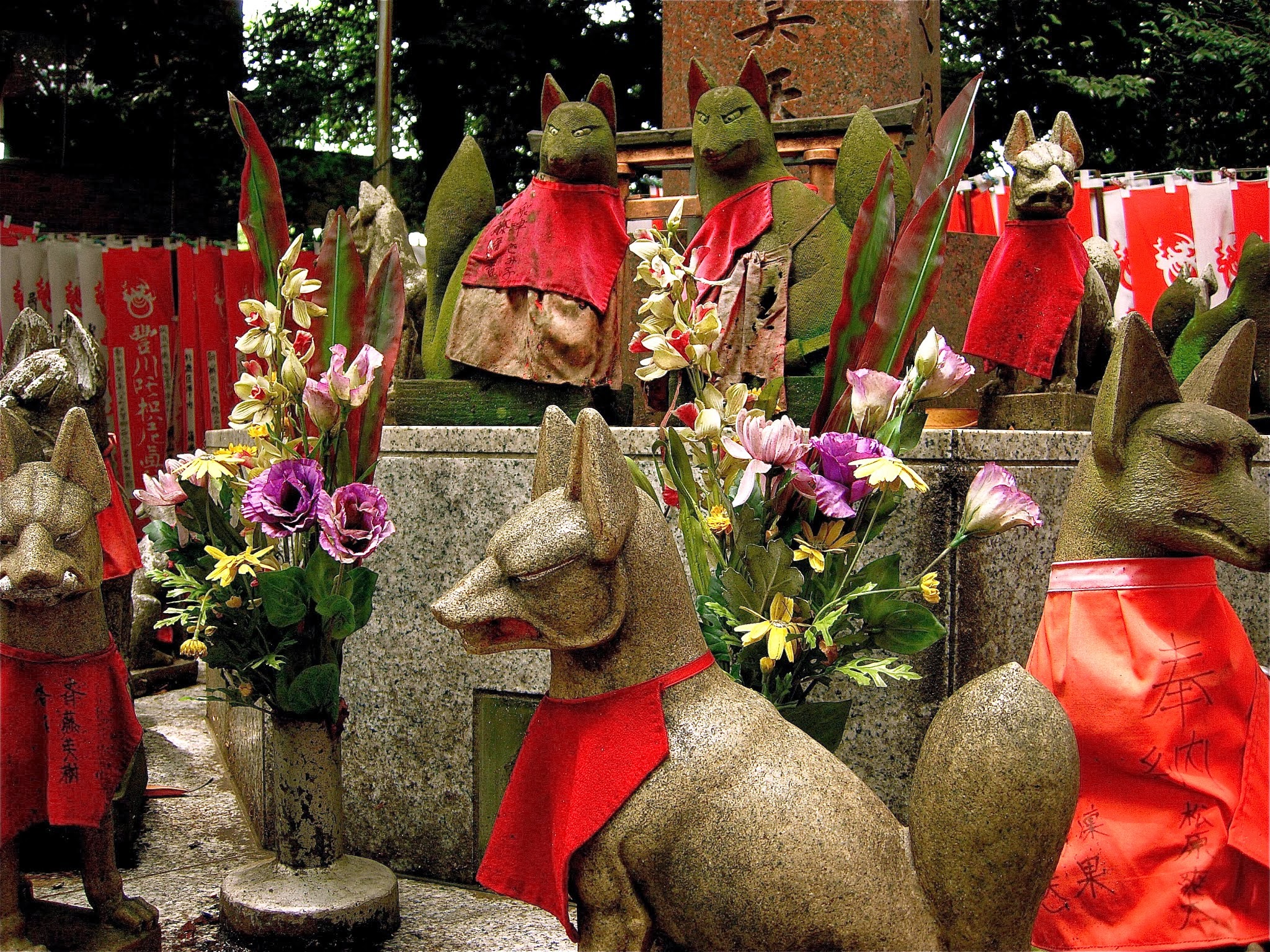 At a shrine in Tokyo

All Levels: My Virtual Art Room